Legendary MLS manager Bruce Arena found his way to the New England Revolution last year. After a revitalizing start to the Revs, it seemed that Arena was poised to bring the same success that he’d brought to LA Galaxy to the Revs. However, after a string of poor performances, people started to doubt his tactics at the Revs.

With a summer to work with New England, it will be interesting to see his philosophy at work.

In this tactical analysis, we provide you with a head coach analysis at Bruce Arena at the New England Revolution. We conduct an analysis to see Arena’s tactics in attack, defence, and weaknesses in defence to see where Arena will look to strengthen.

Arena’s attacking tactics focus on building through the sides

Arena’s main philosophy in New England’s attacks is to use the sides of the pitch to stretch the defence and to then use a dishevelled to their advantage. There are many ways Arena’s tactics enable his team to stretch and several ways of taking advantage of the defence.

One of the first ways is through their use of the 4-4-2. With two traditional wide-men in the formation, Arena places them near the touchline. This instantly has the effect of drawing out the full-backs to the side which is the first step that New England take to widening the defence.

The wide midfielder here drags out the full-back from his positioning in the defensive line. This creates space in his position which can now be exploited by the central midfielder shown in blue. With a run across, New England are now behind the defence and ready to attack the goal.

This explains why the Revs attack on the right-hand side 39% of the time and on the left-hand side 34% of the time – an overwhelming indication of Arena’s goal to play on through the sides.

Another thing that then runs from the full-backs do is that allow the wide-men to now come in the centre. With this central movement happening as well, Arena’s tactics are able to widen the defence and then create a central overload in exploiting that defence.

The effect of this is that New England are able to create numerical superiority in the midfield lines as at any time, you can have four to five men.

With the wide side of the opposition’s defence awkwardly positioned at times, New England are often able to carve out space in the centre and half-space of the defensive line. With the space being created inside the defensive line, Arena now chooses to introduce runners and other continuous movements, such as crossing, to exploit the space.

Here, Gill has come from his wide position and come inwards to the half-space. With the attention now being drawn towards the half-space, Gill cuts the defence into the wing flank for the full-back.

Now with the wide-flank being carved out, three runners, shown in white, sit centrally to attack low crosses and the cut-backs from the wing flank.

With a central overload being created after the widened defence, New England are able to various late runners in the box to attack low crosses and cut-backs. In addition to late runs from midfield, the central overload coming from the midfielders means that the two strikers up front are able to now freely move as the defence has its attention on the New England midfielders.

This freedom allows them to get into positions that are more conducive to scoring goals. That is why the most common forwards, Gustavo Bou and Juan Fernando Caicedo, are some of the highest contributors to Arena’s attack with Bou contributing 9 goals and Caicedo contributing 5.

Here we see a more nuanced perspective of how New England are able to exploit the wing-space to attack. Here through New England’s wing-side play, the formation of the opposition team has been drawn closely to the side. This allows the central midfielders to spot full-backs and their overlapping runs.

In addition to using his unique approach to create goal-scoring chances for his team, Arena is also cognizant of how great two-striker systems are in creating more trouble for the opposition team.

A two-striker system has many types. A common system where both strikers are equivalent in their abilities. Another common system is where two strikers complement each other to create a combined strike force that is complete. Where the first striker lacks, the second striker makes up for it.

This latter system is what Arena has utilized in his New England to great effect. The strikers normally change but because of this general format, Arena has been able to squeeze a healthy amount of goals and assists from all of his major forwards.

In this two striker system, Bou plays the “assist” striker – coming in the middle to aid the attacking play, moving about the pitch to create space, and playing one-twos off creative midfielders like Gill or the second striker.

Accompanying Bou, most of the times, is fellow striker Caicedo. Caicedo is often the “anchor” striker – staying in his position, drawing defenders, using his physicality to bully defenders, and primarily score. These same traits are also shared by fellow striker Bunbury and Arena uses a good rotation to constantly keep his opponents guessing.

Playing off each other, a two-striker system allows Arena to stretch the defence as the two strikers can separate and play on the full-backs. This gives more freedom for the wide-midfielders who can now go central and directly attack the space between the centre-backs without having to go wide first.

The two strikers play on the half-spaces which allows them to stretch the central defenders. Now New England have created a big opening in the centre which can now be exploited by the coming central midfielders.

Another benefit of the two-striker system is that it allows the Revs to start attacks from the centre without having to go the wings. This adds another dimension to the Revs’ attacks as the striker dynamic allows the Revs to engage in quick interplay to twangle the defence and put the ball in the net.

The strikers are again positioned in far positions which creates separation between the two central defenders. Due to this space, the midfield of New England can now push up to the defence. This movement allows the ball-carrying midfielder to engage in either a through ball or involve the nearby midfielder in interplay.

As such, New England have now started an attack without having to switch to the wing-flanks.

The strengths and weaknesses in Arena’s defensive tactics

Arena sets up his to team defend in a 4-2-3-1 with the wide-men and one of the forwards dropping and coming in central to make a block of three in front of New England’s pivot. The main intent here is to provide a good structure for the team as the attacking trio can pressure the build-up allowing the defence to isolate the attack.

As a usual pivot based defence, New England seeks to isolate the attacks at the wings. With a pivot system, attacks at wings can be countered with 2v1s or 3v2s. Moreover, the nature of the wings means that there is already limited space on the sides. Overcrowding that area means less space for the opposition and as such New England can securely stop attacks.

However, there are quite a few problems facing Arena’s defensive tactics at New England.

The first one is the actual defensive shape of 4-2-3-1. For the 4-2-3-1 to work, like Brian Schmetzer’s Seattle Sounders, the three-man midfield has to be disciplined to fall back and apply the pressure to the opposition midfield.

This has a negative effect on the defence because, now, there is a chasm of space between the attack and defence. This allows the opposition midfielders to operate in a lot of space, giving them time to ping through balls or to do whatever they desire. The main point here is that because the three-man midfield does not do its due diligence in defence, it makes it hard for the pivot-based defence of Arena to effectively prevent goals.

As such, the pivot often ends up sticking to the defence in attempts to have some compactness in their structure. This only allows the opposition more space to operate in and as such, they are able to overwhelm the defence in the central areas as there are only two midfielders against three or four players.

Due to the midfield trio’s separation from the pivot, there is a big space in the centre. As such, the pivot has to drop back or more space will be opened up. However, this loses Arena’s men central control which, as we’ll see, is important in stopping attacks

Since New England don’t have midfield control, they are outnumbered in the middle of the pitch. This means that the opposition team has all the time to toy around in the midfield and really use their midfielders to drive New England’s defence. If the midfield three had come back then these type of incisive dribbles would be very hard to occur.

However since the midfield three are not back, those types of play can occur and as we see , this creates a 2v1 on the right full-back. With these types of situation, through balls can be made as seen in the picture.

Compounding on top of that is the fact that the full-backs are often caught in their positioning. Like every other team, the full-backs of New England make their way upfield. However, when possession is lost, the full-backs are not quick enough to track back. This leaves the centre-backs exposed, allowing attackers to find goals easily.

Here the full-backs have been caught up too high and now there is a 2v2 situation at the back. While numerically they are equal, tactically New England are at a disadvantage as the opposition attackers are wide. This stretches the already exposed New England defence.

There is a 2v1 situation in the centre. This situation is created because of the right full-back is caught up too high. With being outnumbered 2 to 1, the defender is unable to control the situation and as such, the opposition end up scoring a goal as one of the attackers get free.

As we have seen, Arena’s tactics offer the Revs a lot. It is normal to expect defensive weaknesses for a coach who had been appointed mid-year. As the philosophy, it is shaping up to be an important couple of months for Revs fans.

Arena has established himself at the highest levels and as such, this coming season, New England should bring in their patriotic energy on the pitch with Arena’s blueprint guiding every pass and movement 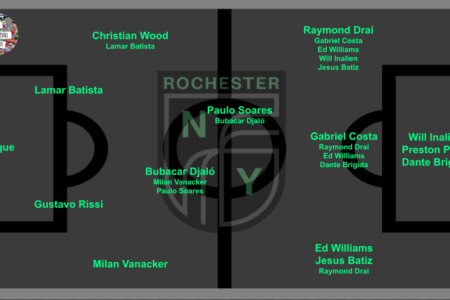