Reading Women played against Manchester City Women last Sunday in the fifth FAWSL fixture of the 2020/2021 season and the game ended with a 1-1 draw. The result was considered a positive one for Reading while for Manchester City, it raised much more uncertainties and questions since this was the second draw after the 0-0 against Brighton Women and these type of results can really make the gap larger with teams like Arsenal or Chelsea.

This tactical analysis article will look at identifying why Manchester City were not able to win and how Reading managed to prevent them from doing so. All this will be done by carrying out an analysis of both teams’ tactics and by shedding light on the key players of the match.

Gareth Taylor chose to start this game with a 4-3-3 formation relying on Ellie Roebuck as a goalkeeper, Alex Greenwood and Steph Houghton as centre-backs while both Demi Stokes and Lucy Bronze as fullbacks.

In midfield, Keira Walsh played as a defensive midfielder and Sam Mewis and Rose Lavelle as right and left midfielders, respectively. In front of them,

Georgia Stanway played on the left-wing and Chloe Kelly on the right wing while Ellen White was the team’s forward.

For Reading, Kelly Chambers started the match with a 4-3-1-2 formation that included Grace Moloney as a goalkeeper, Deanna Cooper and Molly Bartrip as centre-backs while both Natasha Harding and Emma Mitchell played as fullbacks.

For the team’s midfield, Reading relied on Jess Fishlock as a defensive midfielder while Angharad James and Rachel Rowe played as right and left midfielders, respectively. In front of them, Lauren Bruton had the mission of linking between the midfield and the attack by playing as an attacking midfielder behind both forwards, Amalie Eikeland and Danielle Carter. 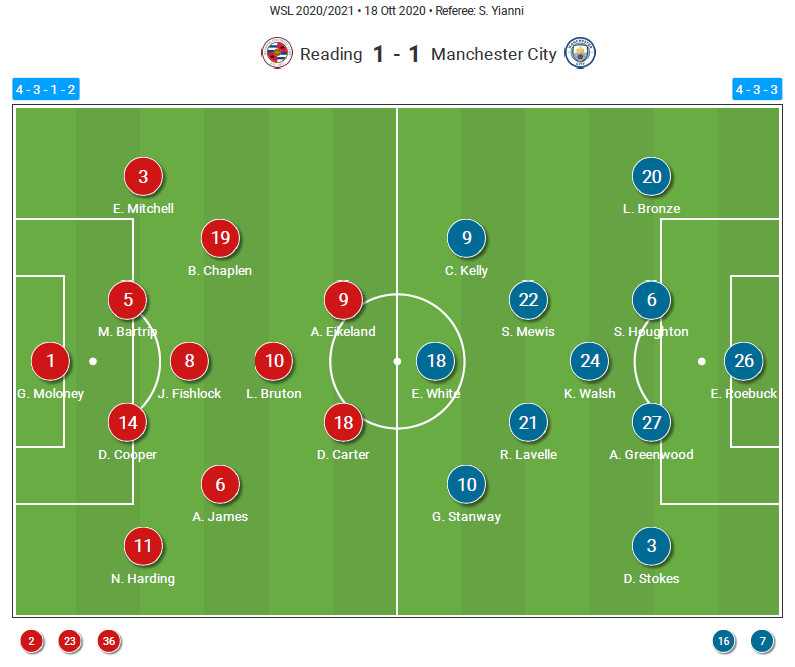 The game started with Manchester City pressing very high on Reading defenders in an attempt to oblige them to commit mistakes and prevent their build-up from the back. However, as soon as Reading progressed into Manchester City’s third, they created problems from the second minute.

Manchester City defence was not very solid and concentrated in marking especially in these first minutes and therefore Reading exploited this lack of attention effectively and Bruton had a scoring chance but her half-volley was saved by Roebuck and the bar. And in the first corner of the game, Reading scored thanks to Eikeland who was faster than her direct marker in moving towards the ball. Also, it should be said that Manchester City’s defence needed to be more attentive and stronger during these set-pieces.

Following that goal, Manchester City tried to make a reaction and started by trying to build-up from the back but what lacked was the determination and the confidence. And that’s why there were many wrong or inaccurate passes from the team.

And these inaccurate passes were also partly due to Reading’s continued pressing which was usually focused in the center of midfield and due to the fact that Reading did not completely retreat to just defend after scoring their goal. You can see in this example how Reading midfielders pressed on White and obliged her to give the ball away. 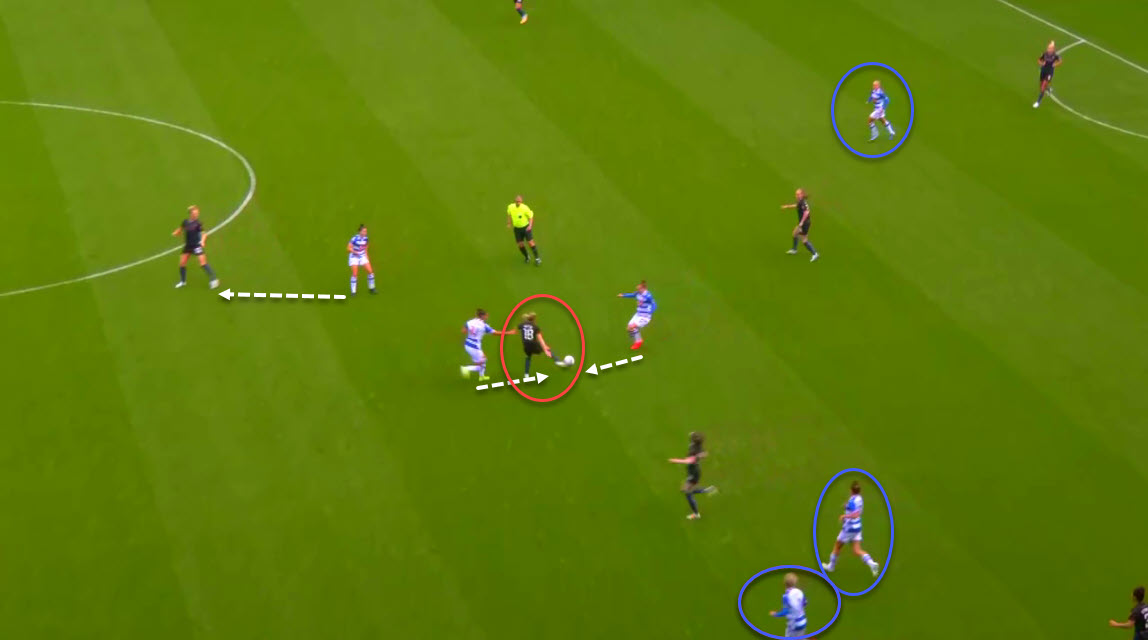 After some more minutes however, Manchester City started to attack more and reach Reading’s penalty area regularly through crosses, shots and penetrations from the wings and then passes to White. What lacked was only the accuracy in front of the goal, because in the following picture for example, White received the ball in a suitable scoring position but she failed to shoot it faraway from the goalkeeper’s hands. 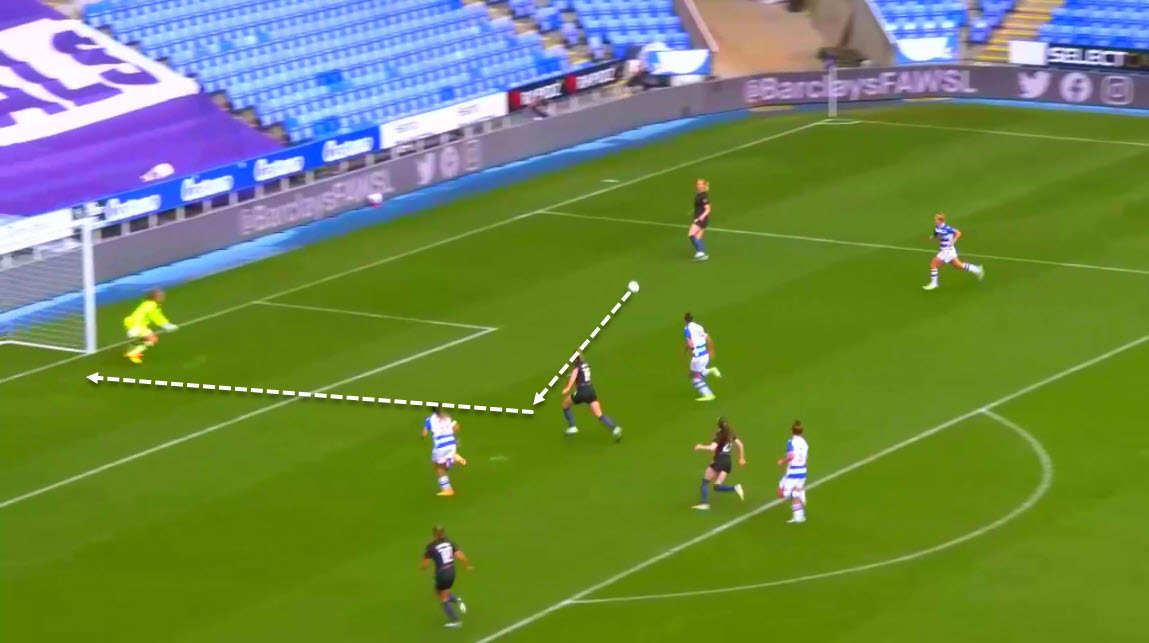 Also, Lavelle played an important role in linking between midfield and attack even though she was not playing as an attacking midfielder. But thanks to her pace and dribbling skills, she was able to pass Reading’s midfielders and create spaces for her teammates in attack by providing through passes. Like in this example in which she dribbled past four Reading players and passed to Mewis in the free space on the right-wing. 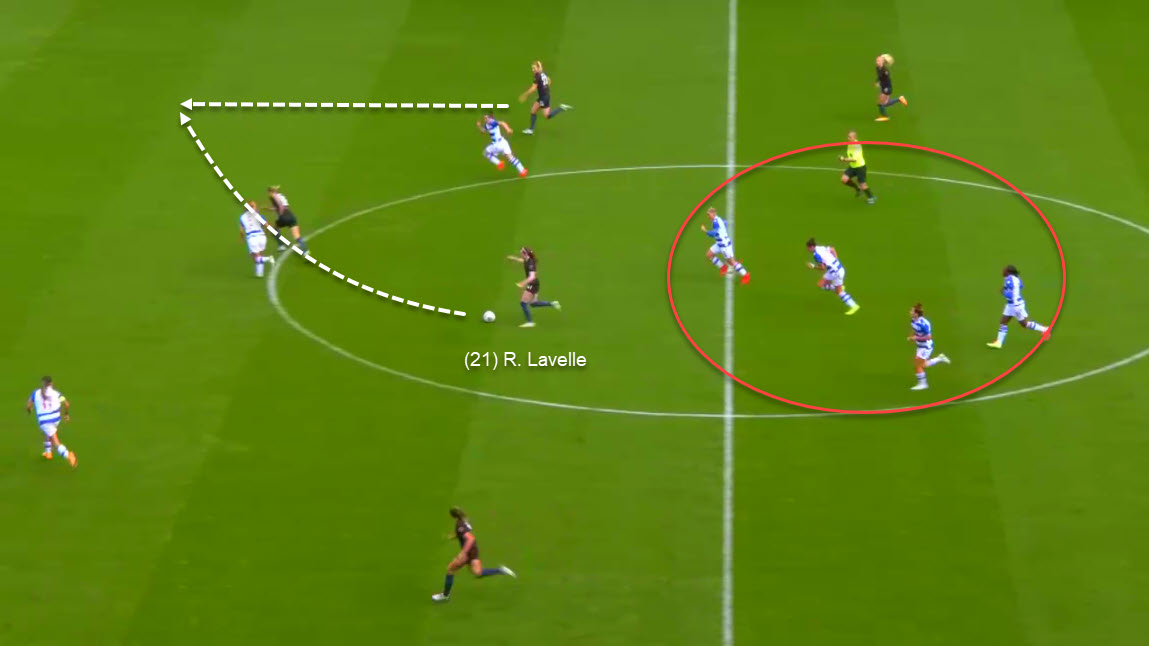 Reading however continued their pressing to prevent Manchester City from building from the back easily and to win the ball back faster, even though Manchester City had some dangerous opportunities. And this shows the amount of courage and attacking play that this Reading team has got.

These pressing efforts were often successful not only thanks to pressing, but also because of some players’ lack of passing accuracy at times and overconfidence at other times.

For instance, in this example Bronze was in a situation in which she knew that Mewis was surrounded by two players and could easily lose the ball if she passed to her. And not only did she pass to her instead of crossing the ball to someone else, but she also did not pass the ball accurately and gave it away to Reading players. 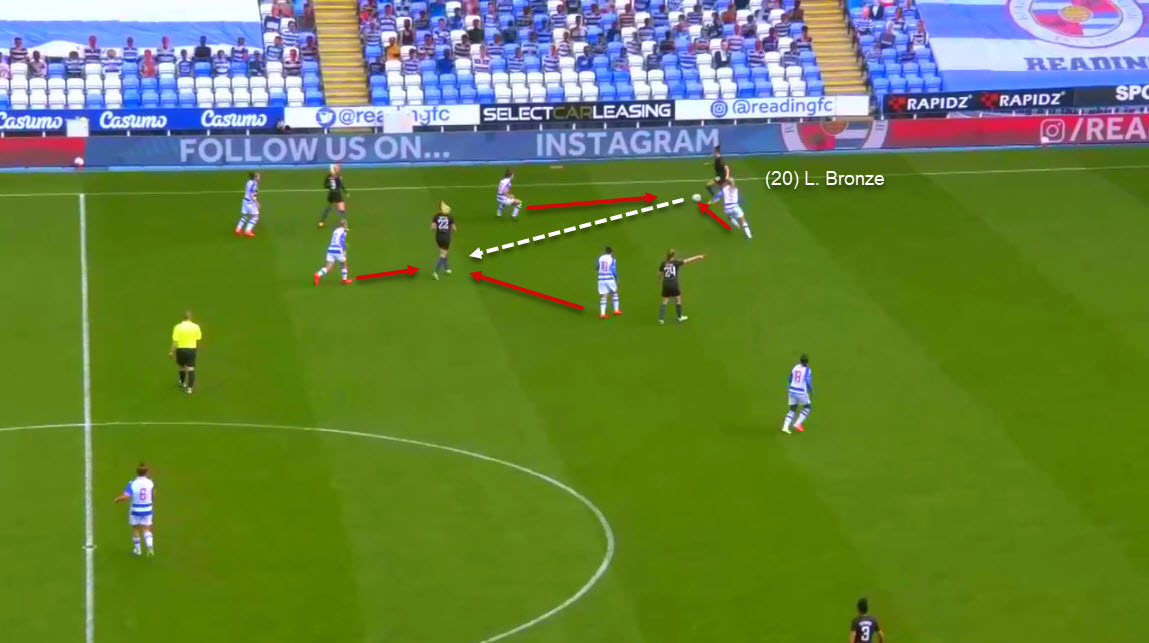 Here as well, you can see how Lavelle received the pass while being pressed, and instead of focusing on giving it back to Greenwood, she made a wrong pass and the ball ended in the possession of a Reading forward. These kind of mistakes may seem normal since they were not converted into goals, but they surely reduce the team’s overall confidence and make the opponents make even bigger pressing efforts to oblige Manchester City players to commit more mistakes. 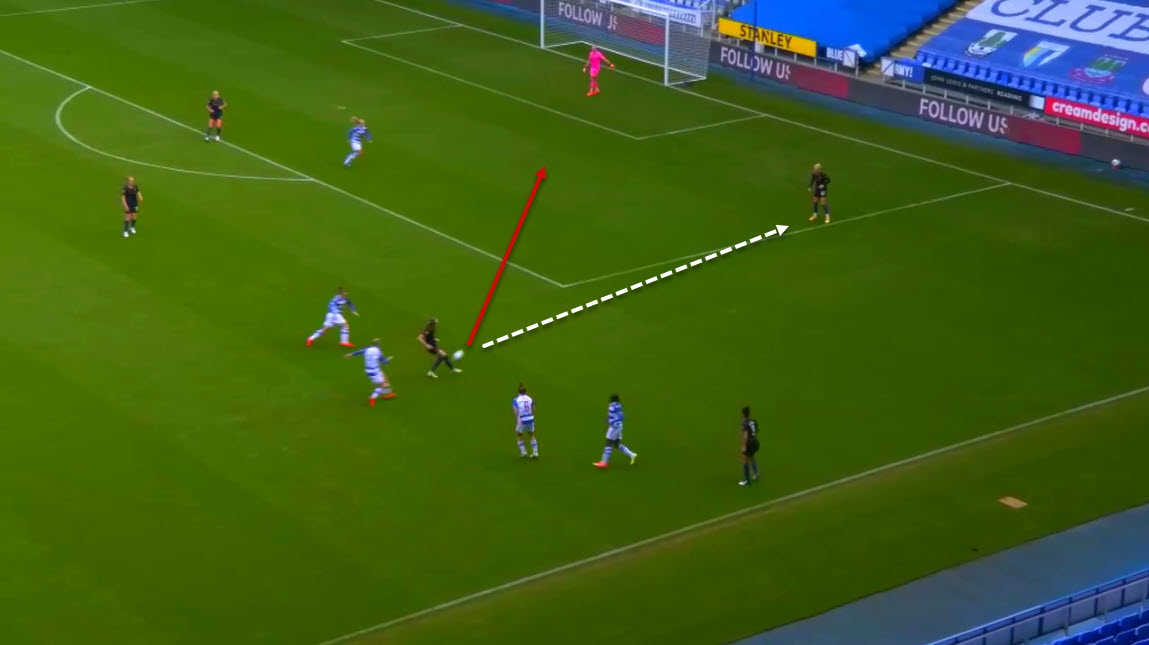 The first-half ended with a 1-0 score for Reading who were excellent in defending their advantage by pressing high and preventing Manchester City from creating chances from the back. However, Manchester City started to find spaces on the wings from Kelly and Stanway thanks to Mewis and Lavelle’s accelerations with and without the ball. Also, Stokes and Bronze contributed to the start of these chances more often.

And from the start of the second-half, Manchester City started to attack with more players in the final third and Stokes and Bronze started to make overlaps in attack more often. In this action for example, Lavelle moved without the ball to provide a passing option for Kelly between the defenders.

And at the same time, Stokes made an overlap and was free on the left-wing and waited for Lavelle’s backheel pass to be able to cross it afterwards. These types of combinations not only created scoring chances but also helped Manchester City get more freedom and confidence in attack since Reading were very organised when defending and often made it difficult for Manchester City to pass through the midfield. 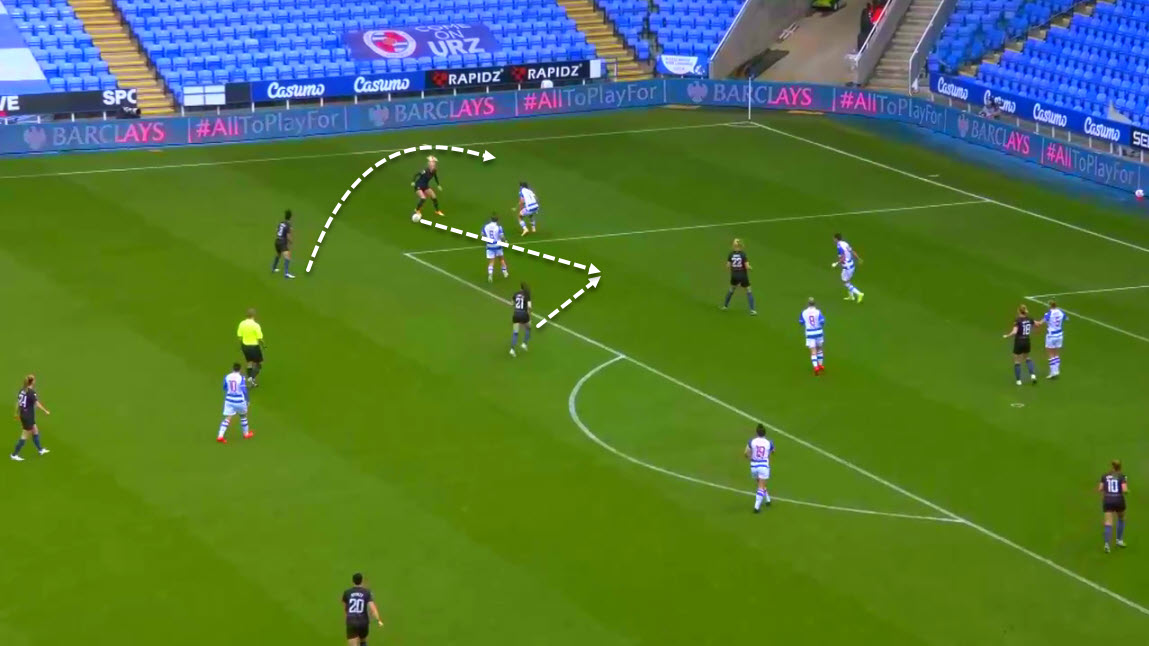 Following these recurrent attacks, Manchester City were able to score after a very good effort from Stanway who dribbled twice and passed to Mewis who cut inside and scored. And this goal gave the required motivation to Manchester City players to make extensive high pressing and aim at scoring the winning goal. And therefore, they started winning more balls thanks to pressing and to Reading’s passing mistakes, like you can see in this example, but they were not able to score. 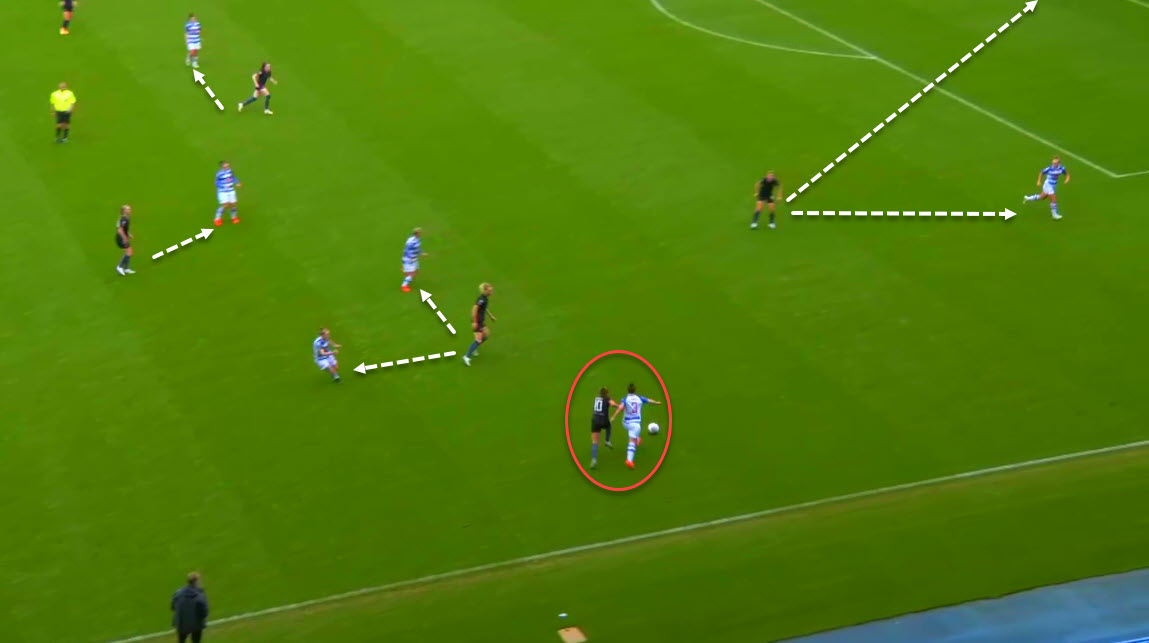 Scoring was not possible for Manchester City in this match because simply all players who had clear scoring chances did not shoot on target and even when they did, their shots were in the hands of the goalkeeper, except the shot of Mewis.

Kelly for instance had a clear scoring chance in this second-half after an excellent work and pass from Stanway on the right-wing, but she wasn’t able to shoot with power nor with precision. From this distance and without disturbance from opponents, this shot should have been at least on target especially when it is from a talented player like Kelly or later on from Lavelle as well. 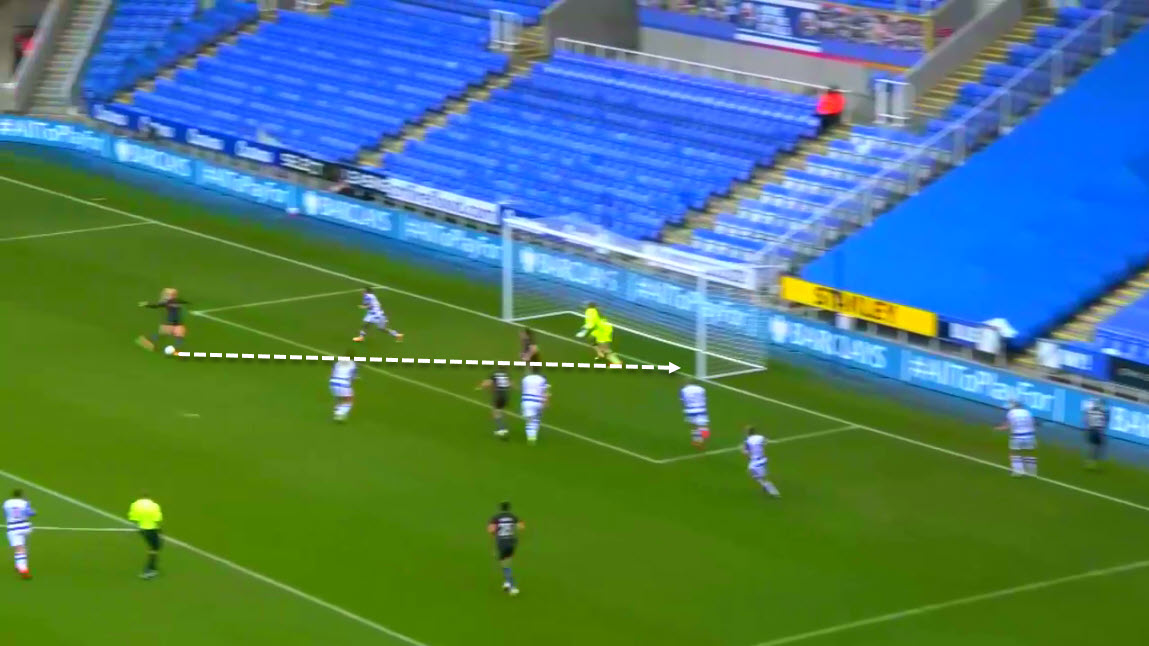 On the other side, Reading were partly satisfied with the score and wanted to keep it like that. They tried to keep possession more often and win free-kicks while defending with determination after losing the ball.

And what facilitated the job a bit for them was Manchester City inability to score easily and to shoot on target regularly. Yet, it should be said that Reading did not create tangible chances apart from the goal, the action before the goal and some free-kicks and corner-kicks.

And this is understandable given the opponent’s determination to win especially in the last 30 minutes of the game. Also, the change in formation from 4-3-1-2 to 4-2-3-1 reduced Reading’s attacking players and therefore attacking opportunities while this change filled the midfield in an attempt of stopping Manchester City’s threat.

For Manchester City, changing Stanway for Park was not really an understandable choice from Taylor since Stanway was doing great and creating a lot of threat. Moreover, and since the team wants to win, it would have been better if Stanway moved to play as a second striker with White and Park was subbed on in the place of one of the midfielders.

And this could have been more useful for the team since by playing according to a 4-4-2 formation with Kelly and Park as wingers and White, Stanway as strikers, scoring chances would have increased and a numerical superiority would have been created inside the box.

The game was full of talented players and most of them played well in search for their respective teams’ win but all what they got is one point. For Manchester City, Greenwood, Stanway, Lavelle, Kelly, and Mewis played very well during this game and all of them were able to contribute to their team’s defensive/offensive phase.

Greenwood did well as a centre-back, intercepted many passes and was also useful in starting the attacks from the back by usually giving accurate passes during this game. Mewis and Lavelle both helped the team win possession and were always present in attack with or without the ball by providing passing options. Also, Kelly and Stanway were excellent in 1 on 1 situations and created many chances for the team but failed in shooting accurately.

For Reading, the whole team played well defensively even though some spaces were usually noticed behind their defensive line, but overall, both centre-backs did well in preventing Manchester City from scoring the winning goal. Also, Bruton and Eikeland were decisive in this match and made things much more difficult for their opponents by scoring early in the game.

Manchester City need to be much more aggressive in the final third and more determined to score and to shoot on target regularly if they want to remain in the race for the top three spots of the league even though it is a bit early for thinking about the final standings.

And on the other hand, Reading should continue to play with courage against the “bigger” teams to win more fundamental points which will serve them in the long run.