This FAWSL fixture witnessed a clash between Arsenal Women, the first of the league, and Manchester United who had an opportunity of climbing over Arsenal and heading the league, and the Red Devils did not let this chance go.  What made this match even more special is the fact that these two teams were undefeated since the start of this season’s FAWSL. Manchester United made a draw against Chelsea and won the other four matches while Arsenal won all their five played matches in FAWSL so far.

Manchester United created a surprise at Leigh Sports Village and won 1-0 against Arsenal in a match in which they mostly dominated and therefore, they stole the lead of the league from Arsenal this week. And it will be interesting to analyse the Red Devils’ approach to this game and look at what lacked Arsenal to win this time.

So in this tactical analysis article, we will provide an extensive analysis of both teams’ tactics while exploring the reasons that allowed Manchester United to win and looking at Arsenal’s tactical issues during this match as well.

For Manchester United, Casey Stoney entered this game with a 4-2-3-1 formation that relied on Mary Earps as a goalkeeper, Ona Batlle as a right-back, both Amy Turner, Millie Turner as centre-backs and Leah Galton as a left-back. In midfield, Hayley Ladd and Jackie Groenen were the team’s central midfielders behind Ella Toone who was the advanced playmaker.

On the same line, Kirsty Hanson played on the right-wing and Tobin Heath on the left-wing, behind the team’s striker, Christen Press who started this game instead of Alessia Russo who was suffering from a hamstring injury.

On the other side, Joe Montemurro preferred to start with the same 4-2-3-1 formation and the lineup consisted of Manuela Zinsberger as a goalkeeper, Lotte Wubben-Moy as a right-back, Leah Williamson and Viktoria Schnaderbeck as centre-backs, and Katie McCabe as a left-back.

In midfield Lia Wälti, Malin Gut played as central midfielders while Daniëlle van de Donk was the trequartista. And alongside her played Beth Mead and Caitlin Foord on the wings behind Vivianne Miedema, the team’s striker. 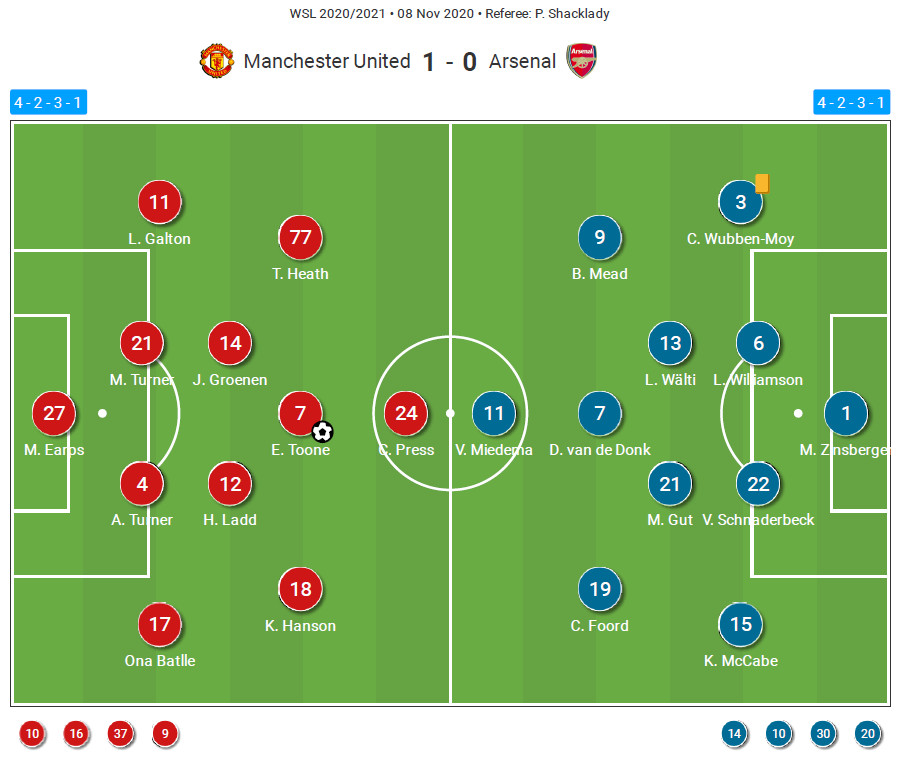 Manchester United were able to deservedly win this match mainly thanks to their attacking approach and plans. They started with great intensity upfront and their pressing on Arsenal defenders was continuous throughout the game. And this allowed them to get many scoring chances and more importantly, it obliged Arsenal players to make mistakes in their own half and struggle in the build-up from the back.

Pressing high with seven players at times surprised Arsenal who were not able to get out of this situation or find ways to counter this strategy. As you can see here, there were seven players trying to intercept the ball in Arsenal’s own third. And this was captured at the 39th minute, which proves that this pressing was not only performed at the start of the match. 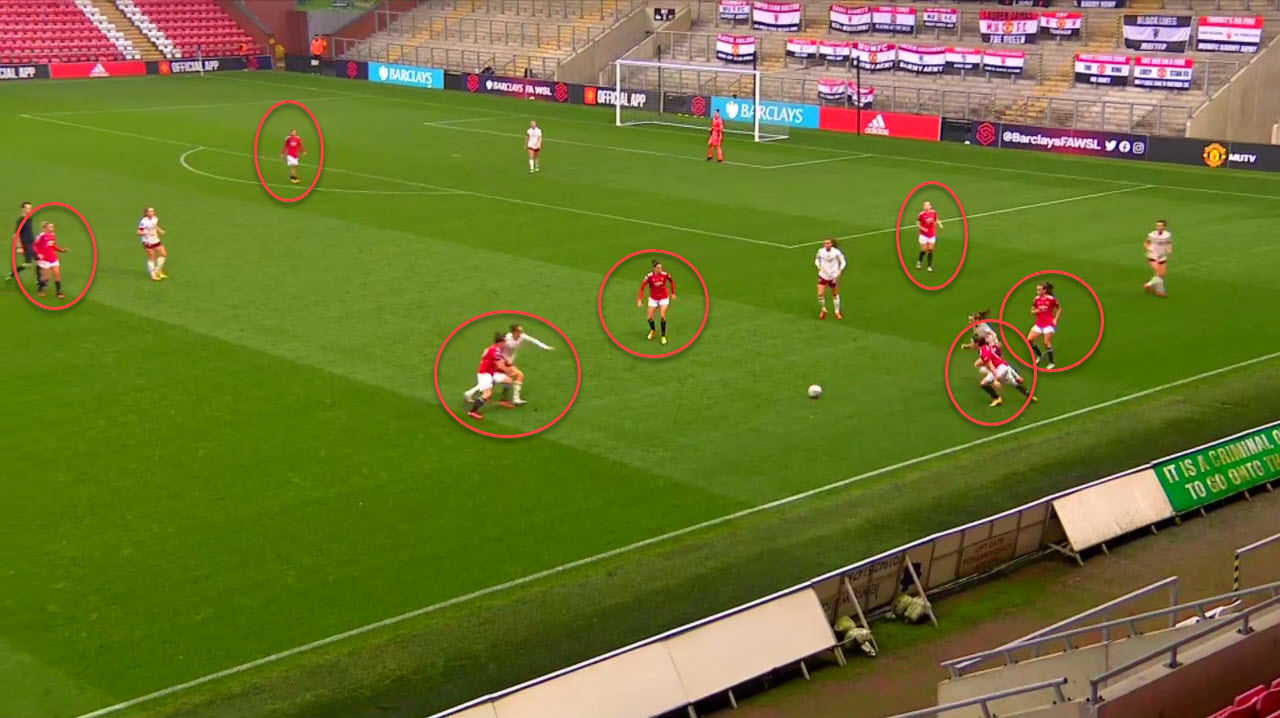 Moreover, in addition to her goal, Toone played a very important role in this game by participating in almost all attacking attempts and linking midfield to attack by positioning herself in free spots to receive the ball and moving a lot, before passing to one of the wingers or to Press. Many Manchester United chances were created by relying on Toone’s playmaking and on accurate and simple passes into space.

The team either attacked with Heath’s penetrations and accelerations and then passes/crosses to Press, or by using two or three quick passes to break down Arsenal’s defence and reach the penalty box. Most of these passes were passed through Toone like this example in which Manchester United reached the box with just two passes. And it is important to note that there was a very good chemistry between the players in this match which allowed them to succeed in most of their passes.

You can see here how Batlle saw Toone’s movement and passed to her immediately, and the latter realised the space left behind Hanson and made the decision of passing to her beforehand. And that was the key factor that added more danger to this action, fast and accurate decision-making and execution. 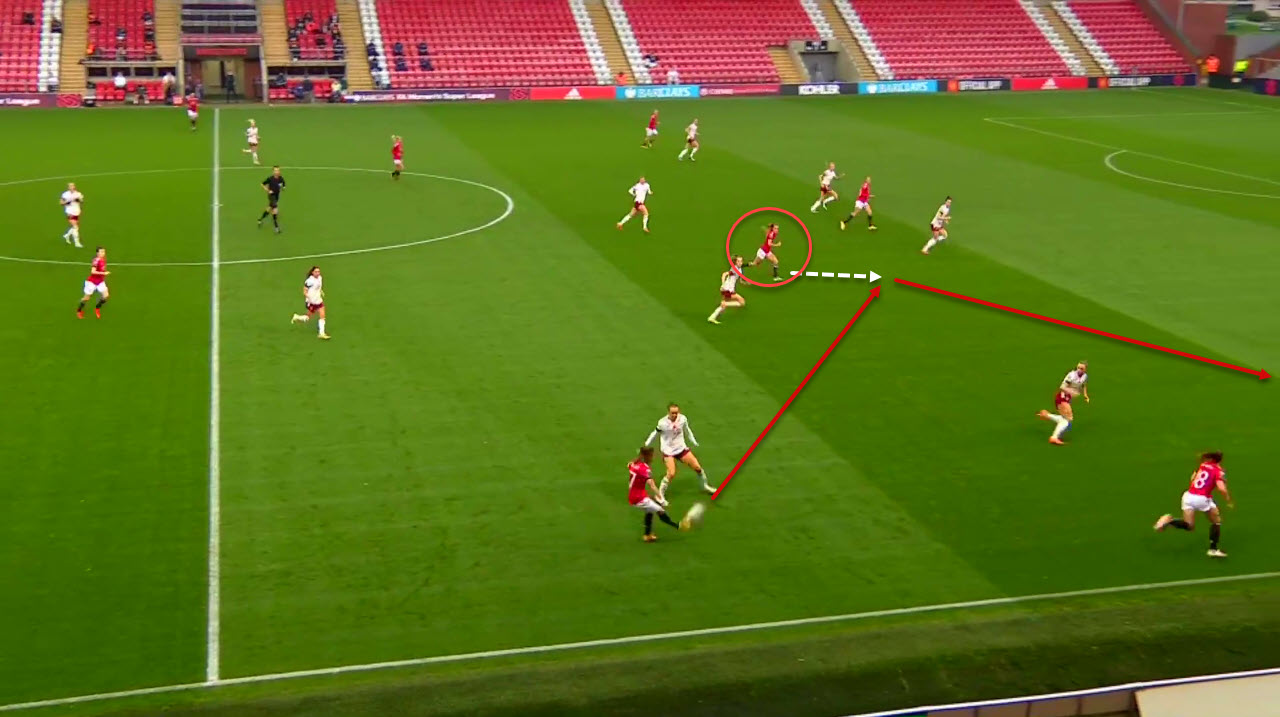 The chemistry between the two American internationals Heath and Press was pretty clear too and it was beneficial for the teams many times. Their exchanges could have grabbed a goal or two for Manchester United since Heath created many chances for Press. Hanson also did pass and cross several times to her but in terms of number and danger, Heath’s efforts were more clear.

And due to Arsenal’s solid defending at times and to Zinsberger’s saves, Press was not able to score but she created a lot of threat inside the box. In the picture below you can notice how she moves without the ball to get rid of her direct marker while Heath fixed her opponent and was waiting for the right time to pass and she did so accurately. 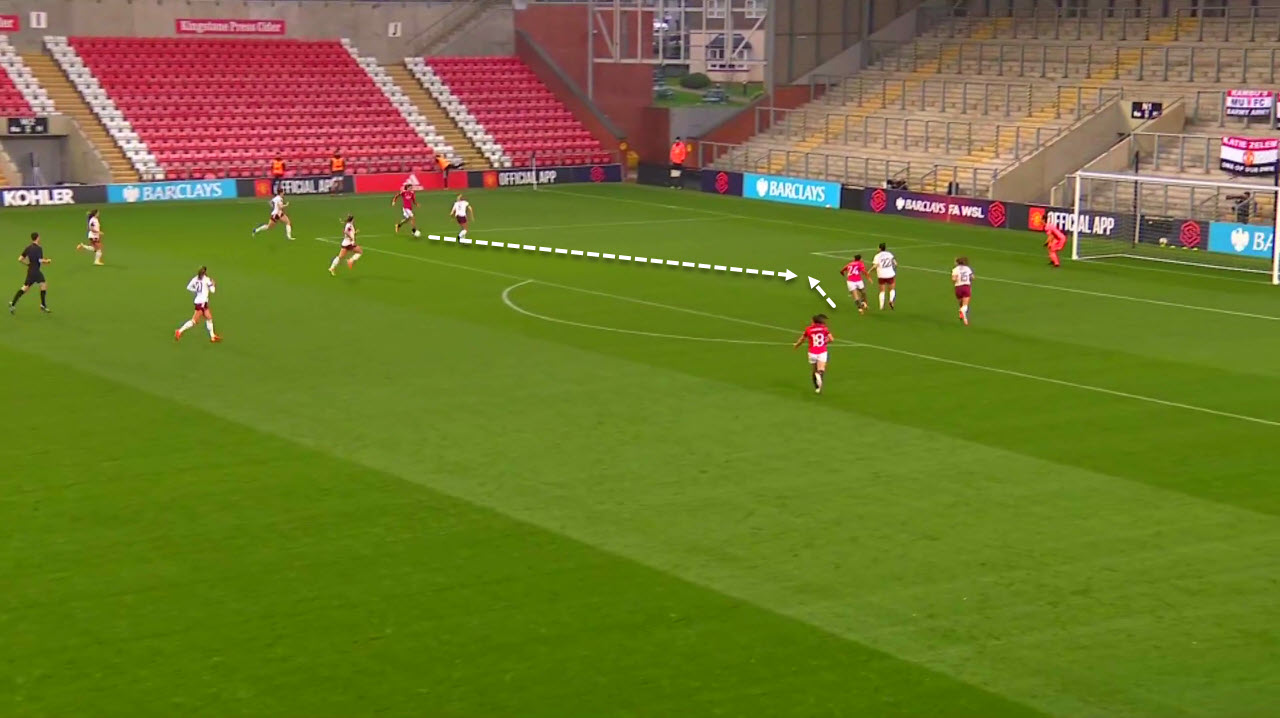 In the second half, and when having quality substitutes on the bench like Jessica Sigsworth, Lauren James and the captain Katie Zelem, things can only go better for the team and we saw that even after scoring the goal. James was excellent in subbing Press and providing attacking depth and physical presence in the box, and both Zelem and Toone were always providing key passes, even though the latter moved to the left-wing to replace Heath.

Also Sigsworth did an excellent job during the goal action and contributed with many good passes. And this is all to say that making the right substitutions and keeping some weapons to sub on in the course of the game can always be fruitful especially in terms of performance.

And you can see here how these changes did not affect Manchester United’s attacking threats even after scoring the goal. Toone fixed her two opponents and passed a through ball to James with a technical skill. And James had a lot of space in front of her and could have aimed at shooting or at dribbling past the defender and shooting. But she preferred to pass horizontally to midfielders coming from behind. 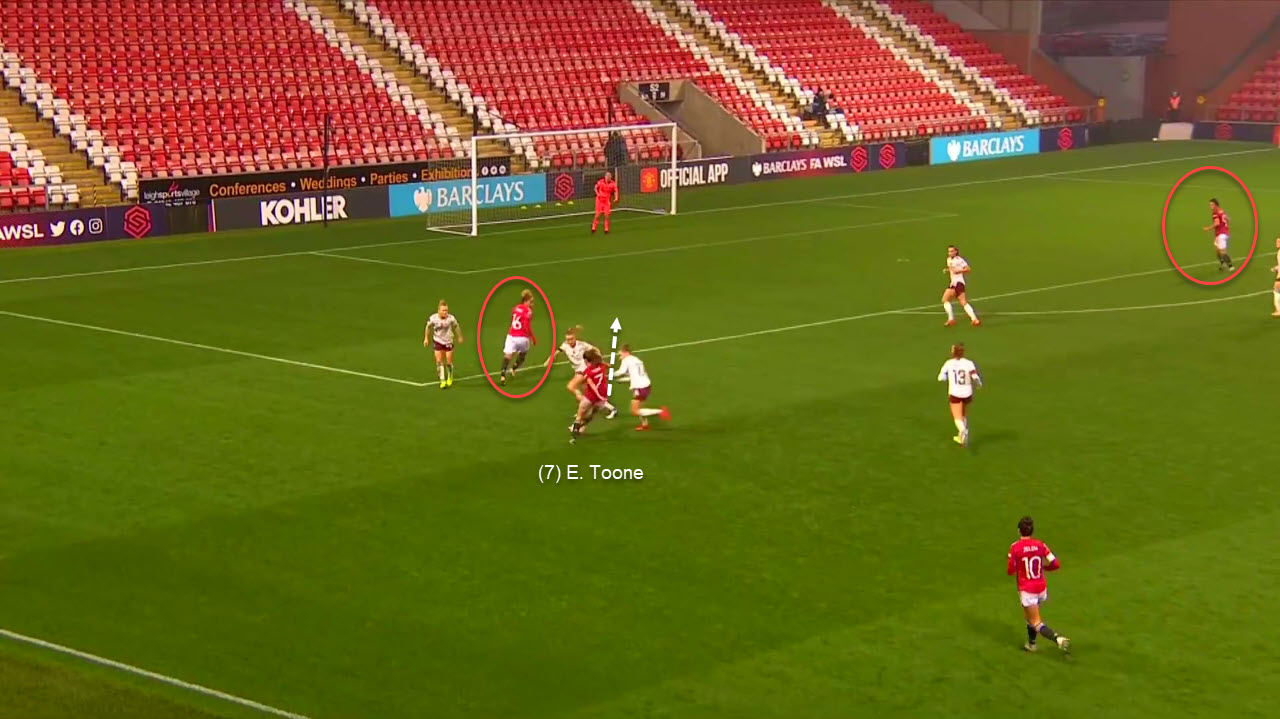 Although they tried to be on the same level with Manchester United during this game, Arsenal were not able to match the intensity and the determination of their opponents’ to win.

And not only they couldn’t threaten Earps a lot, but they were also faced with a very organised defence that reduced the danger of players like Foord, Miedema and Mead. Moreover, the team was not able to create chances due to the heavy pressing put on them and midfielders did not help a lot in getting out of this situation.

It was clear that Arsenal’s midfielders lacked power and physicality to compete with Manchester United’s midfielders who were consistent in winning duels.

And in attack, things were not easy for Arsenal since they struggled in making the ball reach the box because the attacking players were too far from each others and Manchester United’s defenders made sure to separate them even more especially by marking Miedema.

And that’s why at times the latter went backwards to the midfield to receive the ball away from marking. But when she did so, she was not able to create something dangerous even though at some times there were some intelligent movements from her teammates.

For instance, in this occasion, Miedema was running from midfield and saw McCabe accelerating past her defender but she preferred to go for the safe pass. And chances like these could have been exploited better by Arsenal especially since they did not have a lot of them. 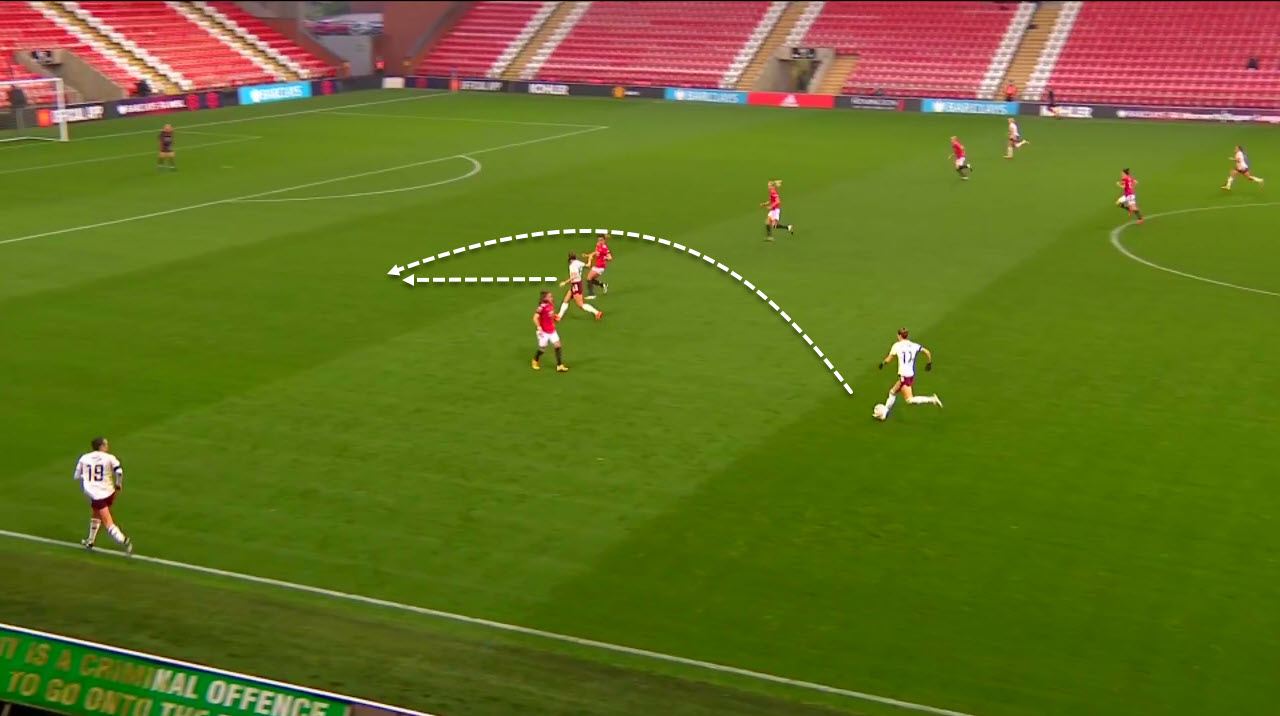 But at the same time, Miedema moved a lot in the final third but did not receive accurate passes. Midfielders were not in their best form and have often passed the ball closer to Miedema’s markers than to her. And this drained the whole team’s energy in vain and was a source of counter-attacks too. For example, in this chance, Foord saw Miedema moving behind her marker and intended to give her a long through ball but instead she gave it away to Miedema’s marker as the red line shows. 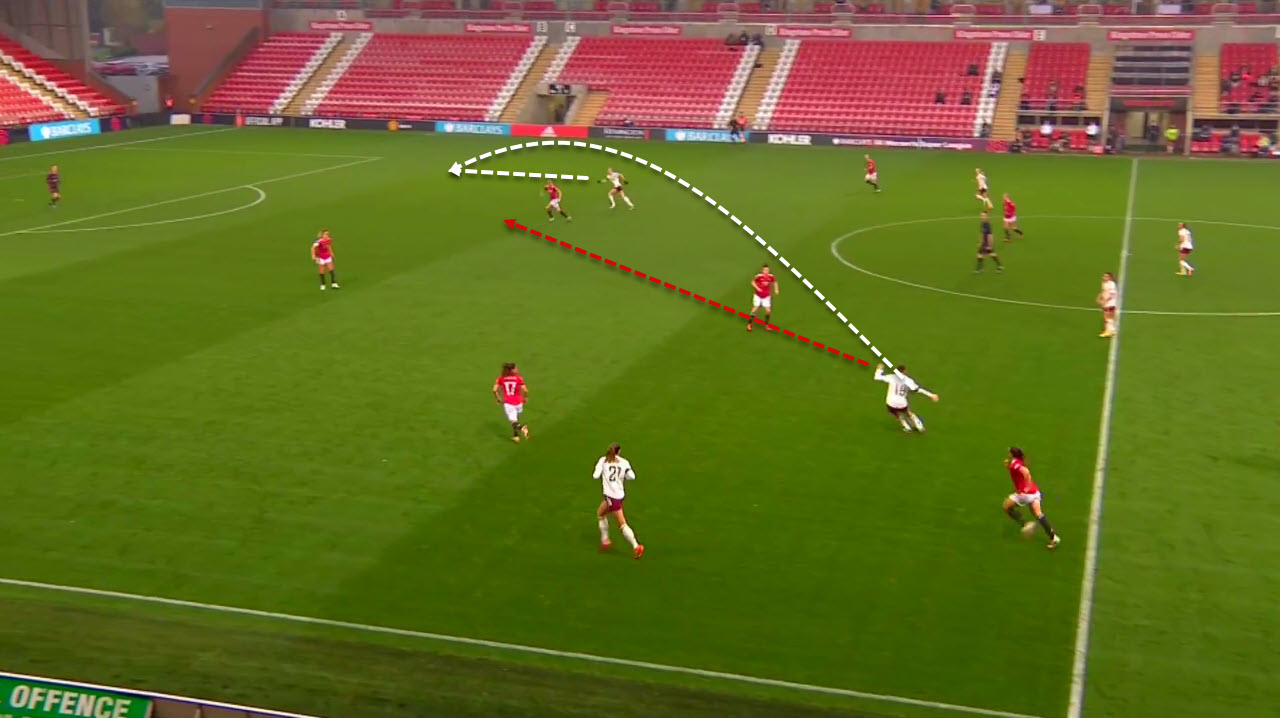 And despite their attacking imprecision, Arsenal were able to defend against many Manchester United chances and Zinsberger in particular played a huge role in keeping a clean sheet until the last minutes of the game during which a defensive mistake allowed the hosts to take the advantage. As you can see below, Leonie Maier’s slip due to the wet grass and to heavy rain, allowed Toone to have a cleared shooting trajectory, which facilitated the job for her and enabled her to shoot at first-touch too. 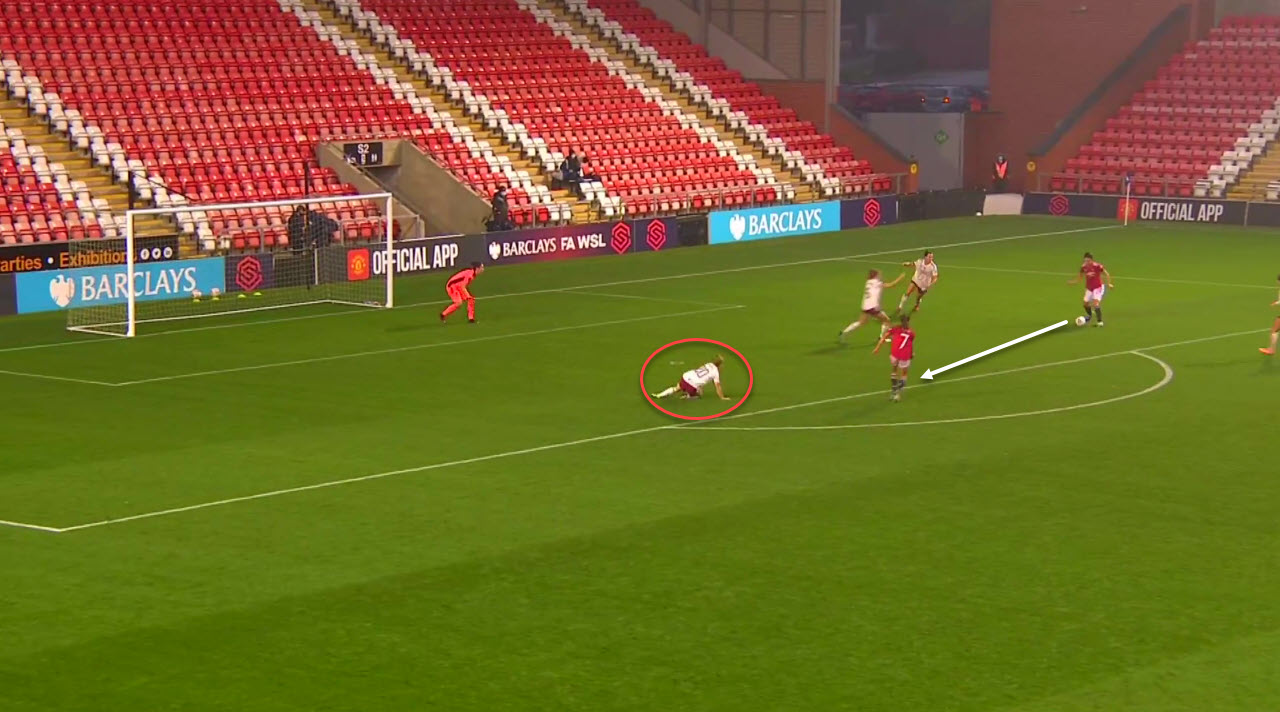 This Manchester United win will give a huge boost and confidence to the players and allow them to think about playing in the same way or better against the other big teams which they will face in the coming fixtures. And they will need to already start preparing for the derby against Manchester City which they will play next weekend.

For Arsenal however, things did not go as they wished this time and a loss like this one after consecutive wins is surely frustrating but should not affect the team’s confidence because they remain one of the best FAWSL teams in terms of performance this season.