Sevilla are a fascinating club for a variety of different reasons. It is rare for a director of football to be more synonymous with the club than any coach but this is the case here as Monchi has become one of the most respected and interesting people in football when it comes to intelligent recruitment and squad building. They have also built a reputation as Europa League specialists as they have won the competition a remarkable four times in the last seven years. Their recruitment tends to see a high turnover of players but the consistency of their performances year on year tends to suggest that the club is exceptionally well run.

Over the year the turnover in terms of their coaches tends to be just as busy with many coaches, with different game models and principles of play, the current incumbent for Sevilla is the former coach of the Spanish U21 and senior teams as well as FC Porto in Portugal and Real Madrid, Julen Lopetegui. It is fair to say that Lopetegui is perhaps best known, outside of Spain at least, as the coach who was so impressive in taking Spain to the 2018 World Cup before leaving his job a matter of days before the tournament to take the vacant position as coach of Real Madrid. Lopetegui did not last long at the Spanish giants but Sevilla feels like a club that fits his profile and style of management far better. He is free from the pressure that all coaches feel at Real Madrid and able to build a team around his favoured principles of play.

This is, in fact, what makes Sevilla under Lopetegui so interesting. There are elements of their play, especially in the build-up phase, of positional play as they look to create opportunities to progress the ball cleanly and quickly from the first line. They are also, however, very structured in their approach.

From a tactical perspective Sevilla have a clear preference for playing in a 4-2-3-1 or 4-3-3 system. The differences between these two, of course, comes in the configuration of the midfield block. When a player moves towards the highest line then they essentially become a ‘10’ they could just as easily, however, move back into a deeper position.

Indeed, it is not unusual for onlookers of data companies to completely disagree on the tactical shape of Sevilla from a game to game basis. This is down to the fluency of movement that we see in the midfield in the attacking phase. 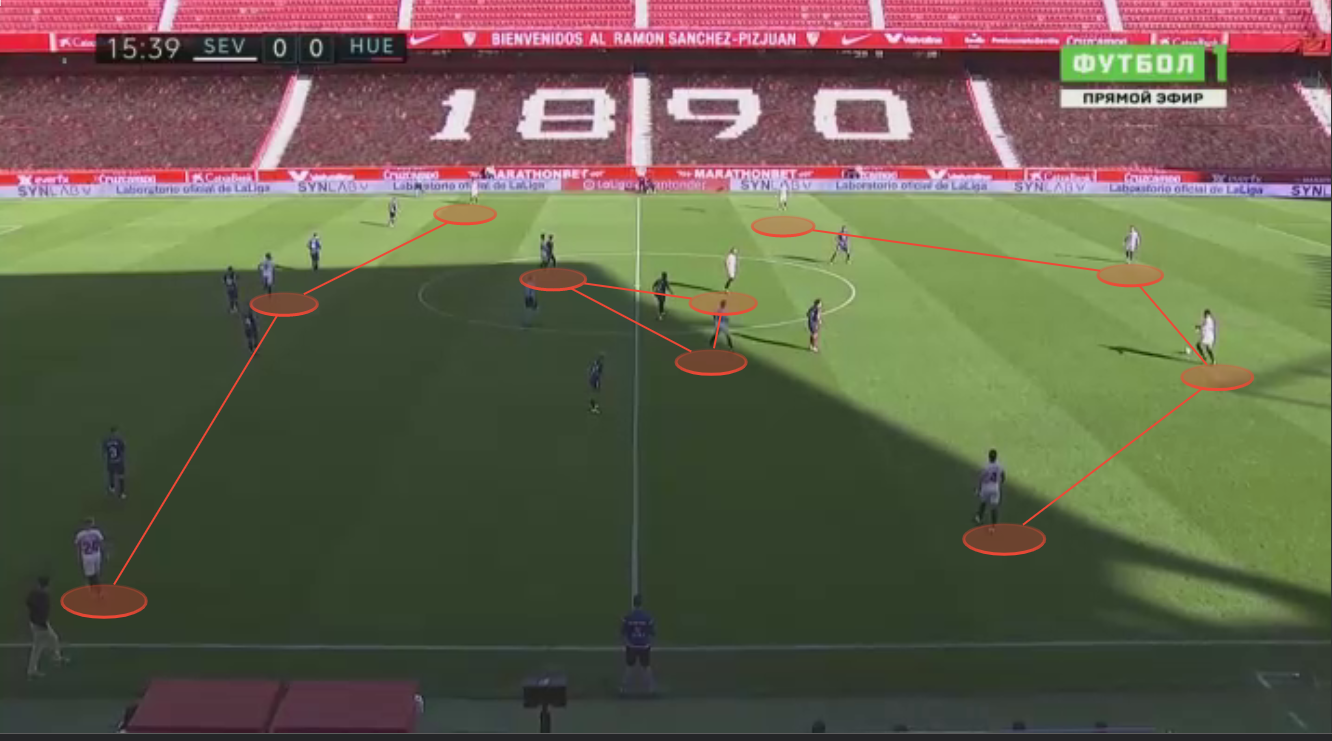 Here, we see a typical system and structure from Sevilla in possession of the ball. The back four is well established with neither fullback moving into positions that are too high and disconnected from the central defenders, this allows the wide attackers to retain a wide position although both are comfortable dropping into and receiving the ball in the half-spaces to aid the progression of the ball.

In the attacking phase Sevilla are, under Lopetegui, interesting. They are structured in their approach and dogmatic in their approach to building out from the back and finding safe progression of the ball from the first line. They are also, however, the only side that comes close to matching Barcelona in La Liga in terms of possession. At the time of writing, they are averaging 60.5% possession in domestic matches. They are not, however, passive in possession as they are averaging a league-high 74.1 progressive passes per 90. They like to move the ball safely from the first line to the second before then quickly progressing the ball through the thirds and activating their forwards in the final third as quickly as possible. 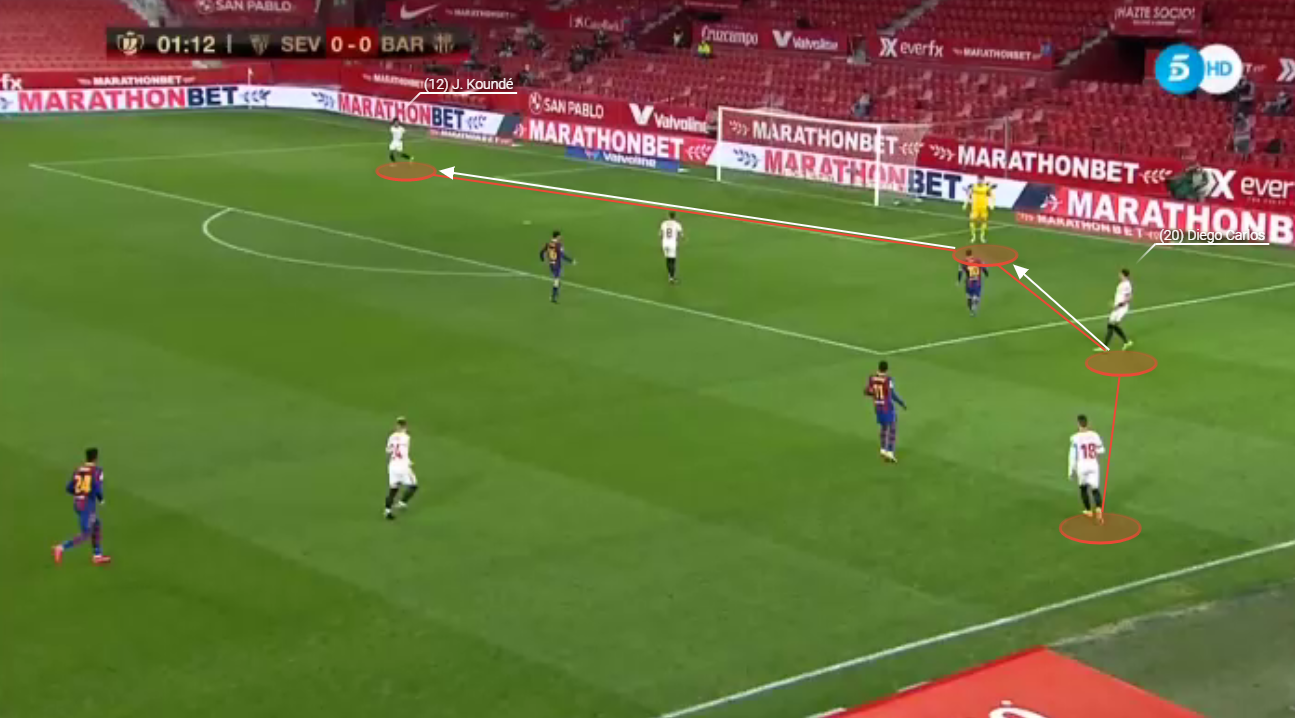 The approach of Sevilla when it comes to building out from the first-line is in line with the likes of Pep Guardiola’s Manchester City and Mikael Arteta’s Arsenal in the Premier League. They are willing to drop players right to the touchline in order to receive and then break the press of the opposition.

Kounde is extremely comfortable in possession of the ball and can receive safely under pressure before calmly playing through the pressure from the opposition. This profile of central defender makes it possible for Lopetegui to play and build the play in the manner that he wants to. 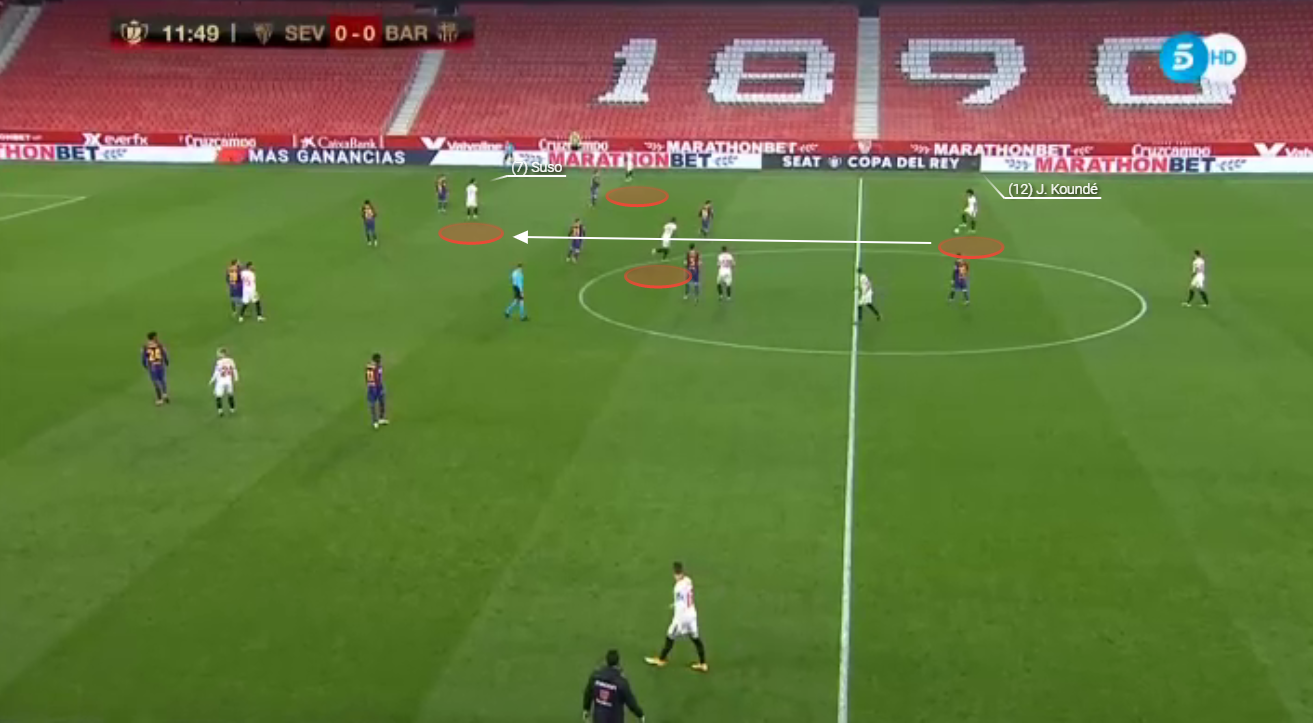 The central defenders, both Jules Koude and Diego Carlos are extremely comfortable in playing passes that break the lines of the opposition. This is the key for Sevilla under Lopetegui as they secure the ball progression through the thirds.

We see an example of this here with Kounde in possession of the ball initially. As we have already touched on above Sevilla are intent on playing vertically with progressive passes where possible in order to move the ball into the final third and to access the highest line. We see Kounde here playing the line breaking pass to find the right-sided attacker Suso in the half-space. 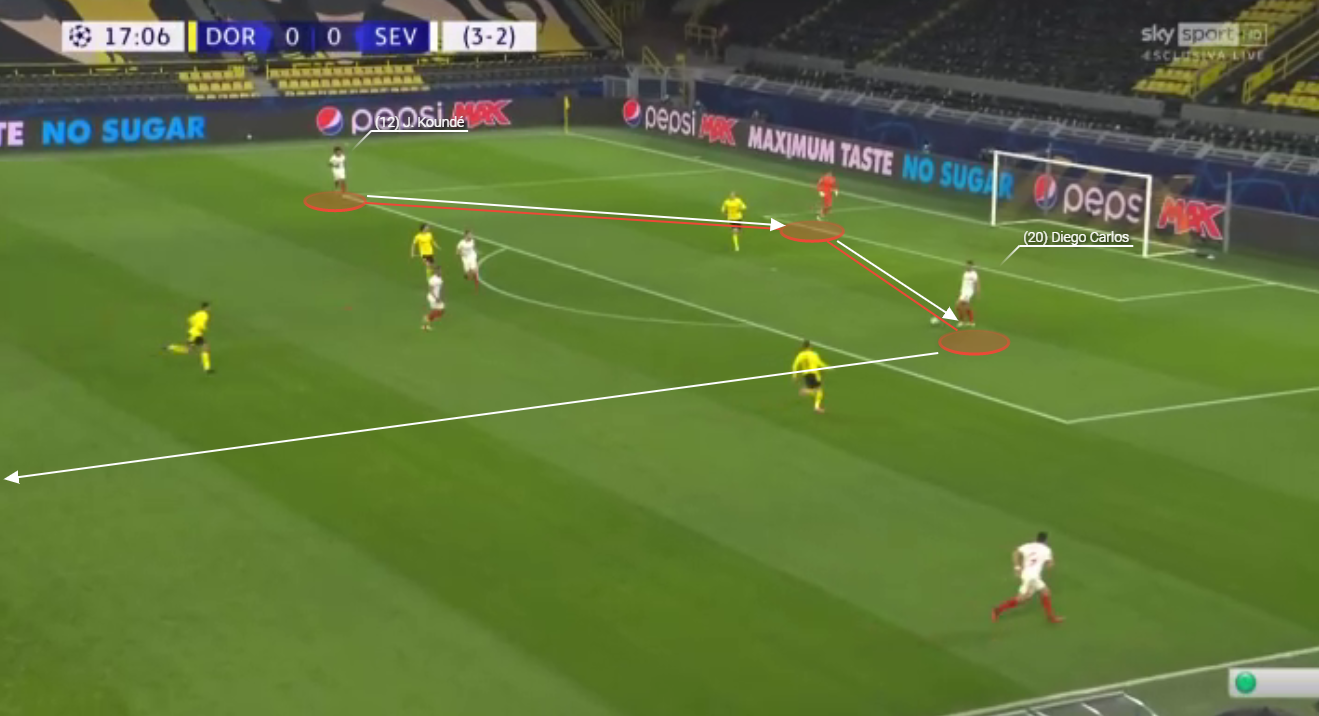 One thing that really strikes you when watching Sevilla play is their patience in possession when initially building out from the back. They are comfortable receiving and playing around the corner in order to play out of tight spaces when under pressure. We see an example of this here with the ball moved across from Kounde, through the goalkeeper, and to Diego Carlos as Borussia Dortmund move to engage and press high and aggressively. Instead of being hurried into making a mistake we then see Diego Carlos playing the vertical pass through the line of pressure from the German side to find a midfielder who is rotating back towards the ball in order to receive.

This, in fact, is key for Sevilla. While the central defenders are extremely capable in possession of the ball the midfielders show the capacity to receive cleanly on the turn in order to maintain the ball progression and the tempo of the attack. 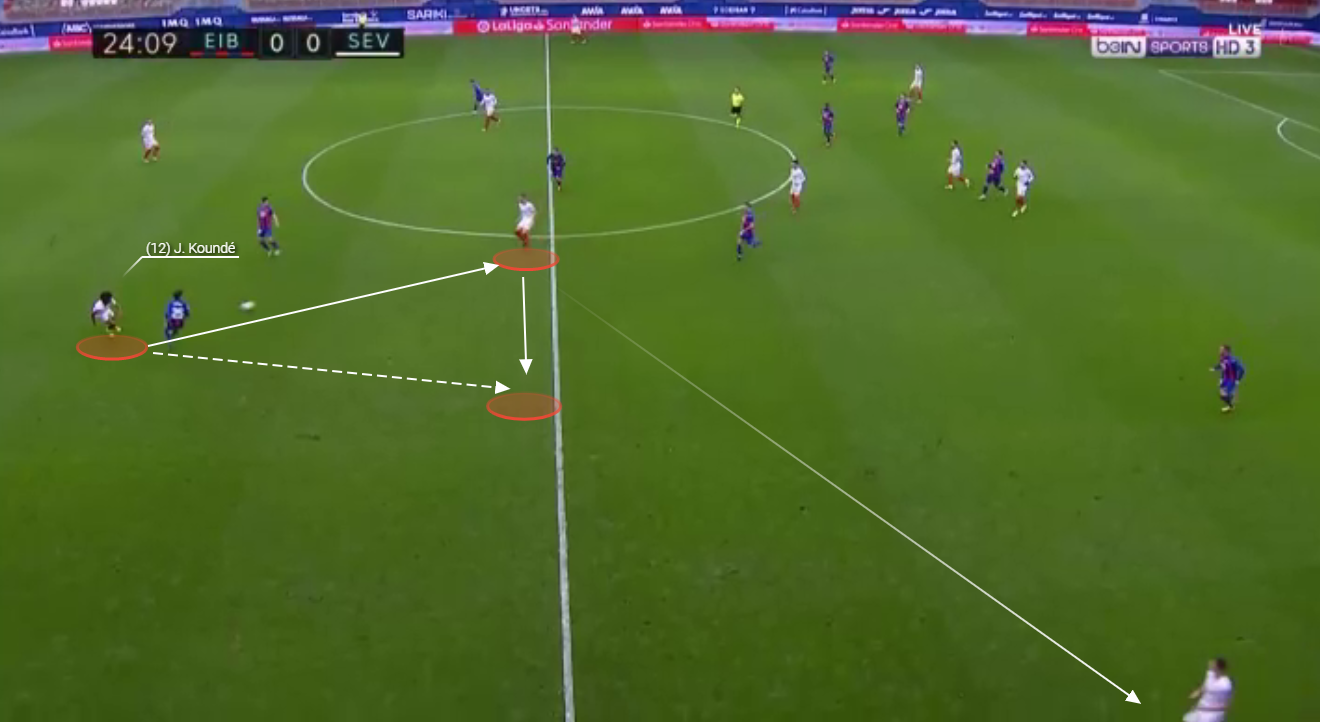 There is no doubt that Sevilla are extremely well-coached and you can see this when they are in the attacking phase with the angles and spacing of the players around the ball. The ball carrier always has at least two options at different angles and depths and this makes it extremely difficult for the opposition to create a defensive game plan to prevent Sevilla from moving the ball through the thirds.

We see an example of that here as again Jules Kounde is in possession of the ball. As he plays into the midfield there is an immediate angle for the receiving player to immediately bounce the ball out to the fullback who is tight to the touchline. Instead, however, Kounde simply moves past the pressing player to receive the ball back from the midfielder before stepping forward in possession.

Out of possession Sevilla are an interesting mix in terms of being aggressive but also knowing how to drop into a more solid defensive block that prevents the opposition from being able to play through them. They have the fourth-best PPDA amongst teams in La Liga with an average of 8.98 passes allowed before engaging the opposition in a defensive action. Again, it is clear that they are very well-coached. 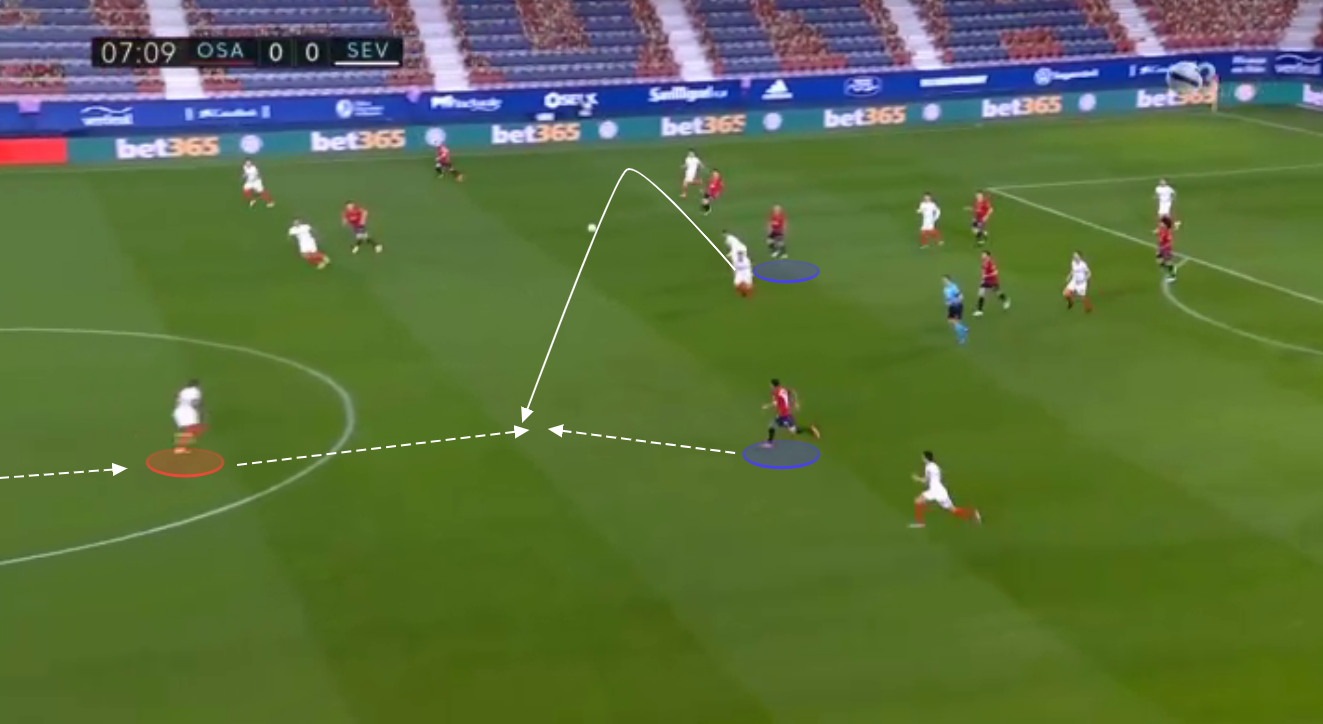 Sevilla are exceptionally proactive when it comes to defending the initial turnover in possession. They will counter-press high up the field but if the opposition manage to safely play through this press then the central defenders will be aggressive in terms of stepping forward to meet the ball.

We see this here as the ball is played forward loosely by the opposition as they look to attack with Sevilla caught up the field. The central defender for Sevilla, however, is extremely proactive in terms of coming out quickly to meet and win the ball. 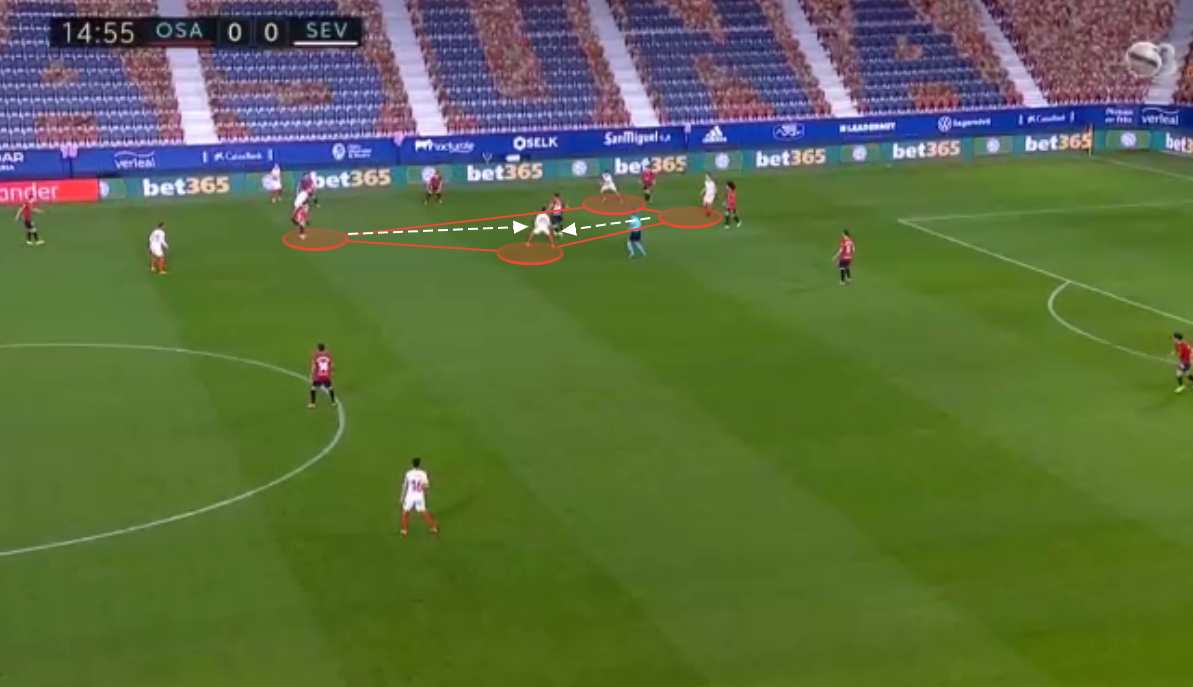 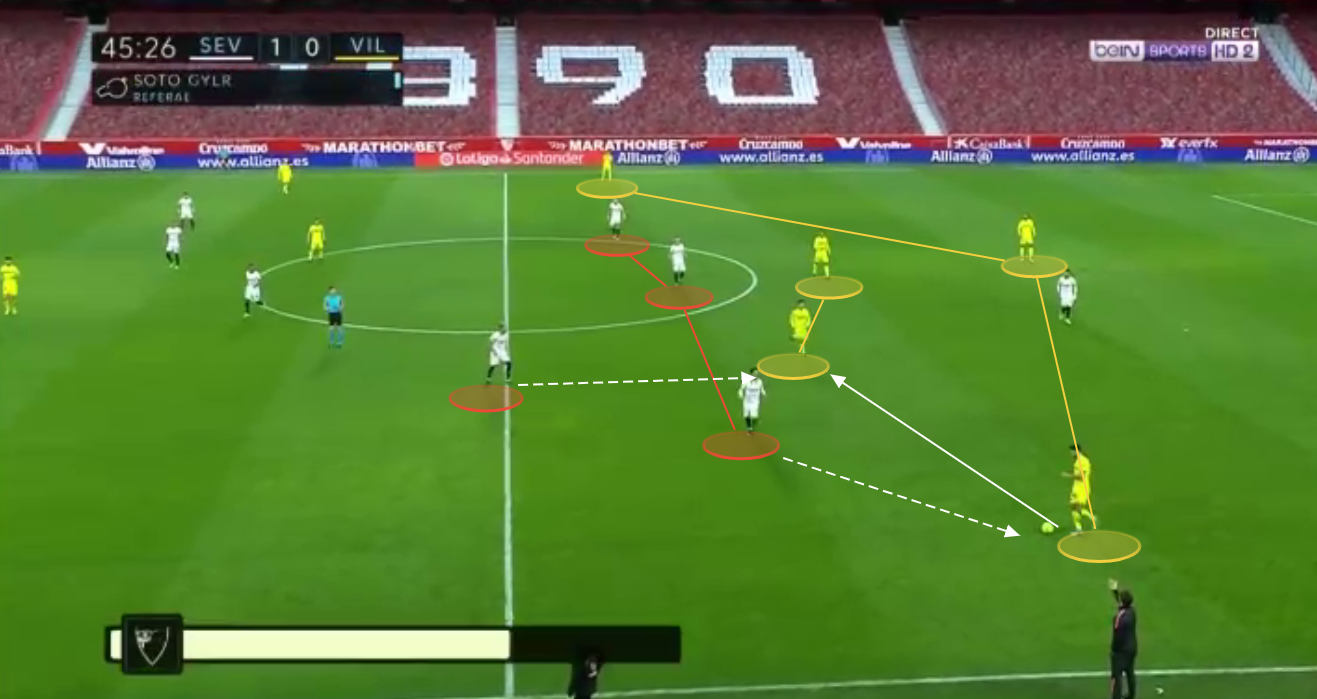 In the more established defensive phase, Sevilla display their balance in terms of pressing in waves in order to apply pressure to the ball carrier. We see an example of this here with the opposition looking to progress the ball inside and then past the obvious line of pressure. It is at this point that we see how flexible the midfield unit is for Sevilla. As the ball is played back inside one of the two midfielders who are sitting as the double pivot moves high to press, beside the 10. This sees the remaining deep midfielder slide across in order to retain the balance of the defensive shape.

Sevilla are in a difficult position in that they want to make the step from Europa League royalty to Champions League regulars. As ever they are building an impressive and exciting squad but keeping Julen Lopetegui at the club for the long term may be the key for the Spanish side in achieving these goals.