As one of the charter clubs for the MLS in 1994, the San Jose Earthquakes have been one of the most historic clubs in the United States. Originally founded in 1974, the Californian side has gone through numerous transformations throughout the years. The Quakes fan base have experienced plenty of success, but the past couple of years have seen some highs and a lot of lows. After finishing dead last in the league with four wins in 2018, San Jose needed a change.

San Jose hired the reigning CONCACAF coach of the year, Matias Almeyda. Known as “El Pelado” Almeyda enjoyed a lengthy career as a player in his native Argentina, La Liga and Serie A. Taking over his hometown club of River Plate immediately after retiring, Almeyda then moved to Banfield. However, the Argentinian made his name in Mexico, leading Chivas to four trophies in the three years he spent there. Having established a reputation for an attractive attacking style, Matias Almeyda was brought in to revitalize the Californians.

This tactical analysis will look at Almeyda’s philosophy, and how it took the Quakes to a deep run in the MLS is Back tournament.

Almeyda has stuck with one formation for the majority of his time in San Jose. Using a very fluid 4-2-3-1, he has given the Quakes confidence going forwards and intelligent aggression in defence. Below we see the average lineup the Argentinian would use in the MLS is Back Tournament. 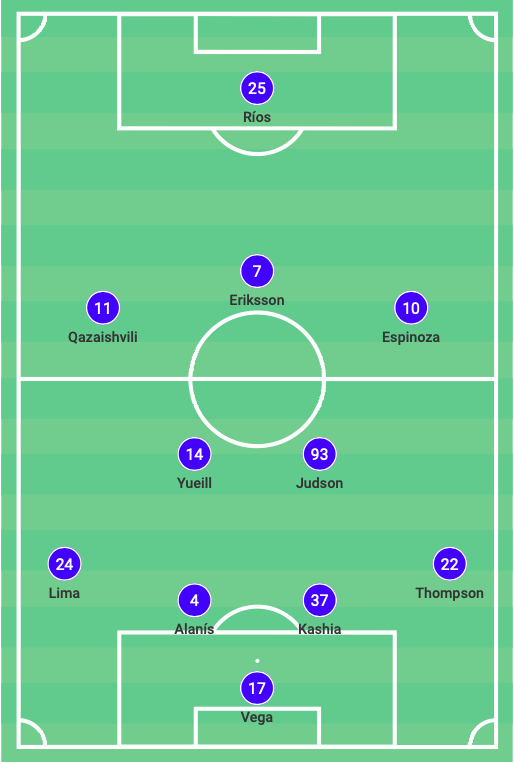 Almeyda’s tactical philosophy mirrors the qualities he was best known for as a player. His teams are tenacious, hard-tackling, have good anticipations and excellent work rate. The following sections of the

The following sections of the analysis will look at how his philosophy is being implemented with San Jose.

Almeyda has been able to take the same group of players from the four-win season and began to change their mentality in the way they attack. In 2018, San Jose averaged 1.43 goals per game. They also averaged 12 shots per 90 with 4.38 shots finding the target. The highest shot count in a game was 17 in a loss against NYCFC. The Quakes finished that season with a possession average of 48%, which shows they were not able to generate much offence.

Looking at the stats throughout the tournament, we see that San Jose went all-in with their attack. Shots per game are now at 17 per 90, with 6.29 on target. Their possession was an average of 60% and the highest shot total was 30 against the Vancouver Whitecaps. 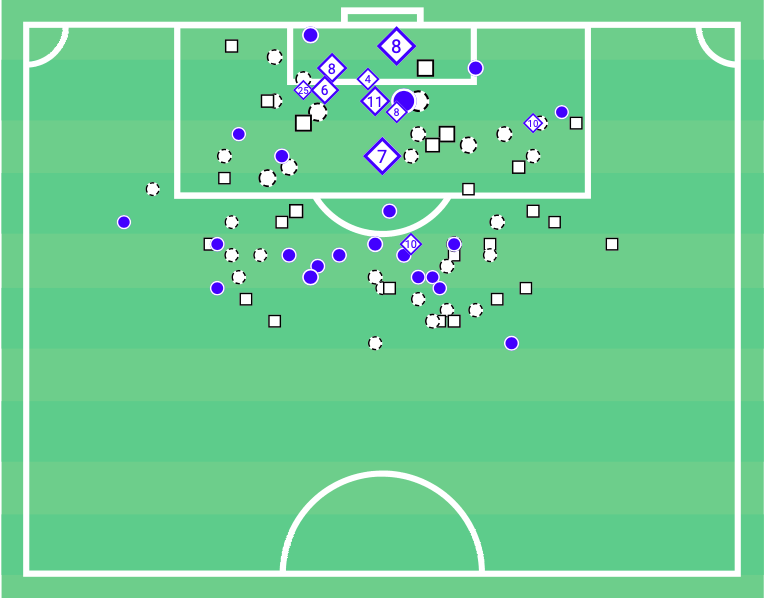 Above we can see a breakdown of their shots from the beginning of the season through the MLS is Back Tournament. San Jose registered 91 shots and scored 12, and using the analysis above we see that there is a variety to the shot selection. It is also worth noting that the Quakes scored three goals from headers and three goals after crosses. This shows that San Jose’s players are able to score in different ways.

In the next section, we will take a look at how Almeyda has San Jose attack the opposition.

San Jose’s positioning when in possession is much different than the 4-2-3-1 on paper. Looking at the average positions this is very easy to tell. It also varies depending on whether Wondolowski or Rios are leading the line. Analyzing the positioning from two MLS is Back matches, we can see that the approach remains the same regardless of the opponent. 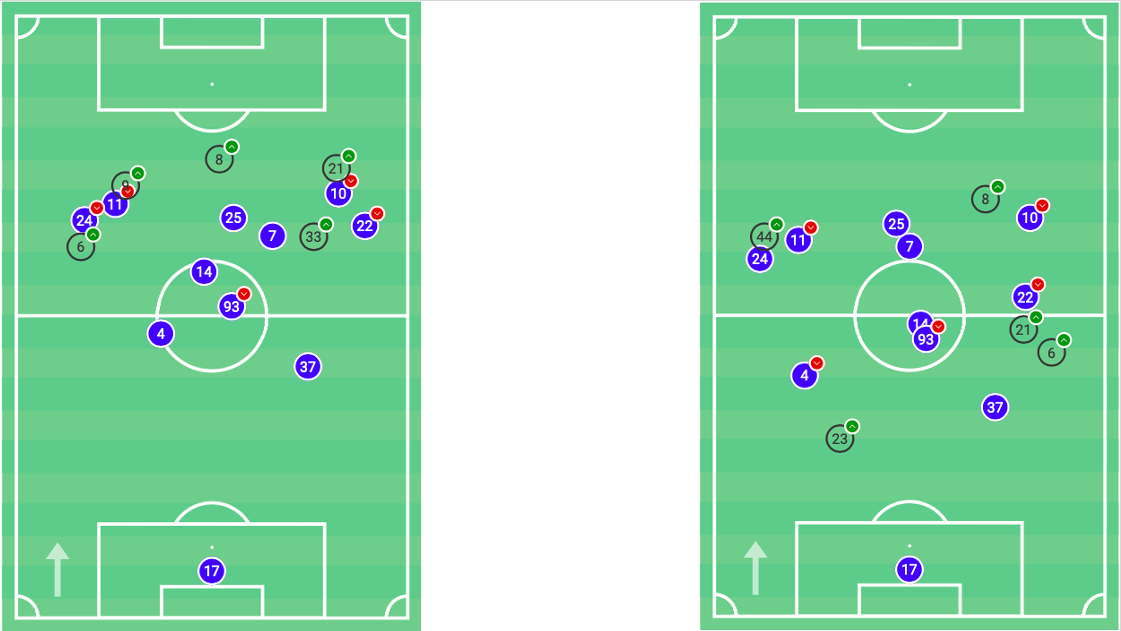 If Rios (25) is playing he tends to drop into the midfield while the wingers will normally operate in the halfspaces. Midfielder Judson (93) will split the centre-backs so that the outside-backs can push higher up the field. If Wondolowski (8) is on the pitch, he tends to stay higher as a classic target man. The tactic they prefer is to create either 2v1’s or 2v2s in the channels using the flanks and halfspaces. 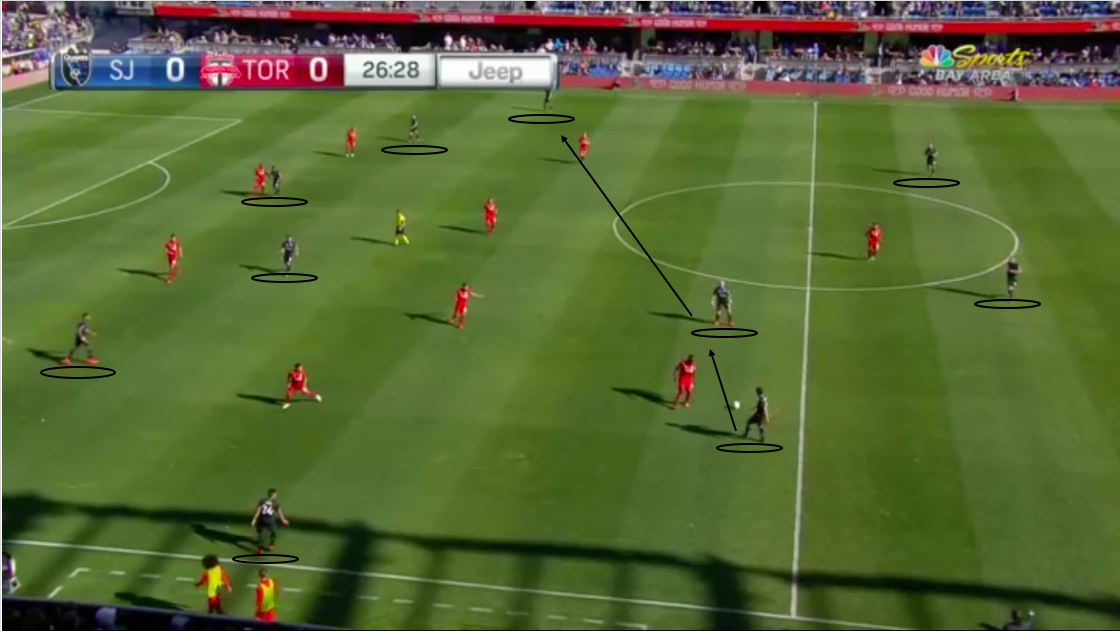 An example of this attacking tendencies can be seen in a match against Toronto FC. With one of the midfielders from the double pivot dropping between the centre-backs, the outside-backs are higher up the field. The other two midfielders, Yueill and Eriksson, have rotated so that the Swede can receive a pass in space unmarked. 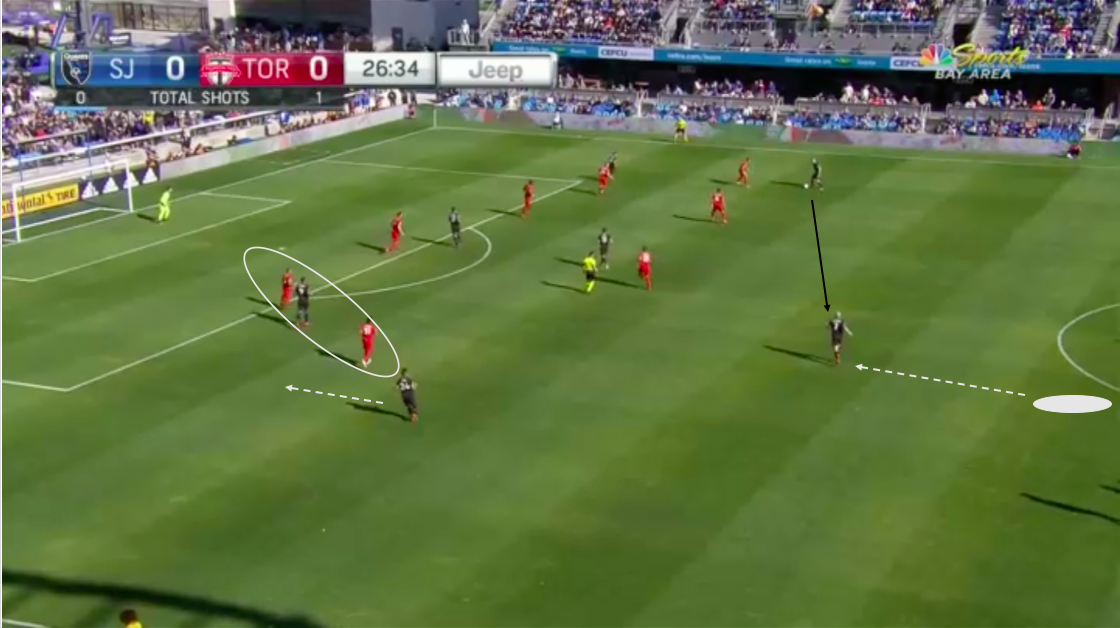 We already see that Toronto’s right back already has to decide whether to drop and mark the winger or step and mark San Jose’s outside-back. Eriksson receives the ball and clips a pass to the right-back, Tommy Thompson. Toronto reacts to the Quakes pushing higher up by dropping further back to defend a potential cross. 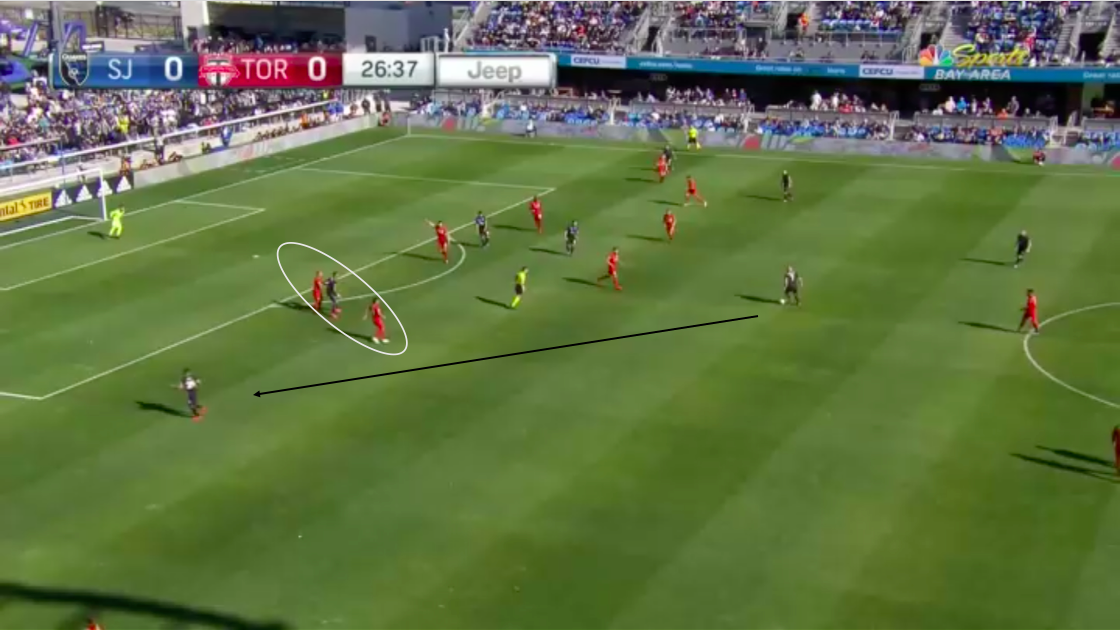 This movement has freed up space for Eriksson to receive closer to the penalty area. As he is scanning before he receives, left-back Nick Lima is communicating verbally and non verbally that he is available to pass to. Toronto’s right-midfielder and outside-back have pinched in to remain compact and defend the cross, which allows Lima to be unmarked. 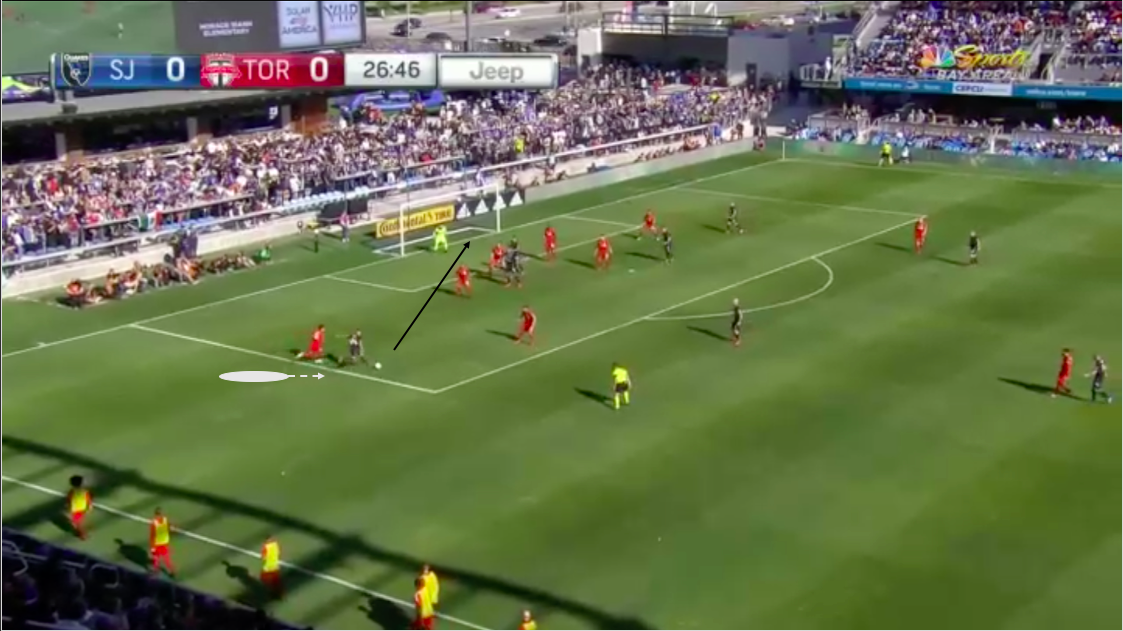 Lima is in a 1v1 situation, where he then cuts inside and takes a shot at goal. Although the keeper saves it, the Quakes end up with a corner.

To go along with a toothless attack, San Jose’s defence in 2018 was quite leaky. They allowed an average of 14 shots per game, conceding almost two goals per game. In four different matches, San Jose allowed the opposition to take at least 20 shots. The Quakes also attempted 66 defensive duels per game, succeeding with 38 per 90.

Almeyda established something different when he arrived. San Jose began to focus on man-marking exclusively. Throughout the tournament, San Jose allowed 11.71 shots per 90. In the 7 games they played from March through the tournament they attempted 68 defensive duels per 90. To put the improvement into perspective, they averaged 76 defensive duels in 2019. 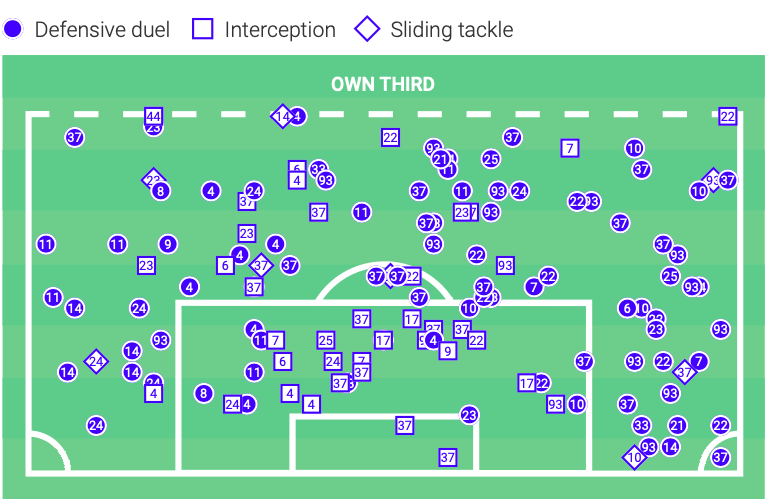 Analyzing their defensive duels in the final third, we see that there is an emphasis on protecting the penalty area and Zone 14. Another thing to note is the number of slide tackles in the defensive third. Of the 121 duels that were won, only 8 came from slide tackling. This shows that Almeyda prefers his players to track their marks and not look to intercept through their positioning.

When San Jose is defending, they tend to leave an extra man high for the counter-attack. The rest of the team will drop back and defend, tracking their marker on the way back. Again using the match against Toronto we see this tactic in action. 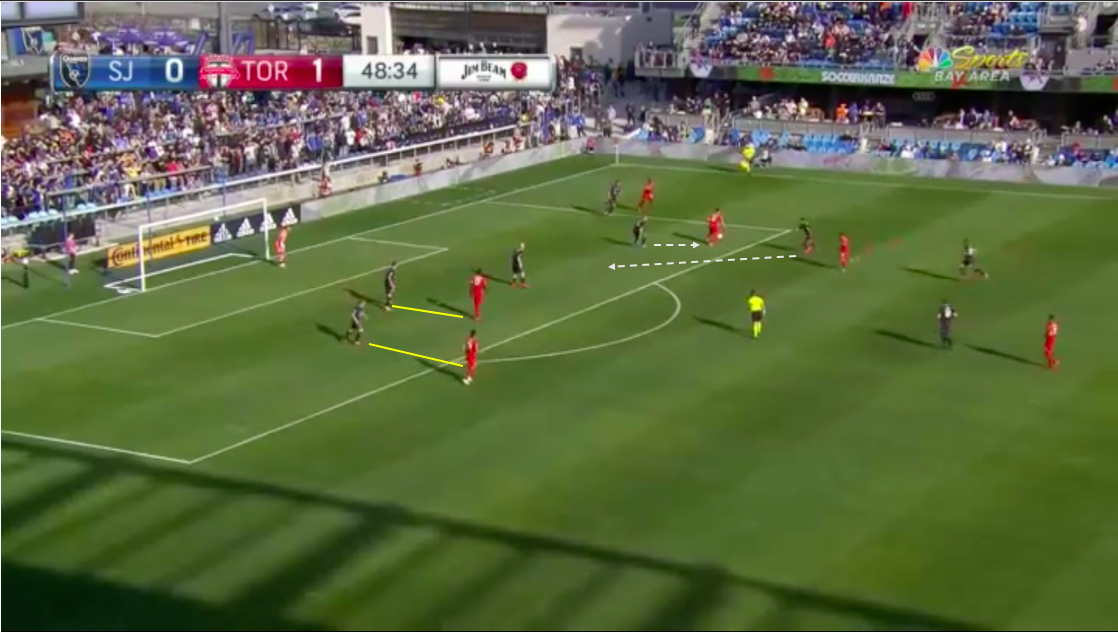 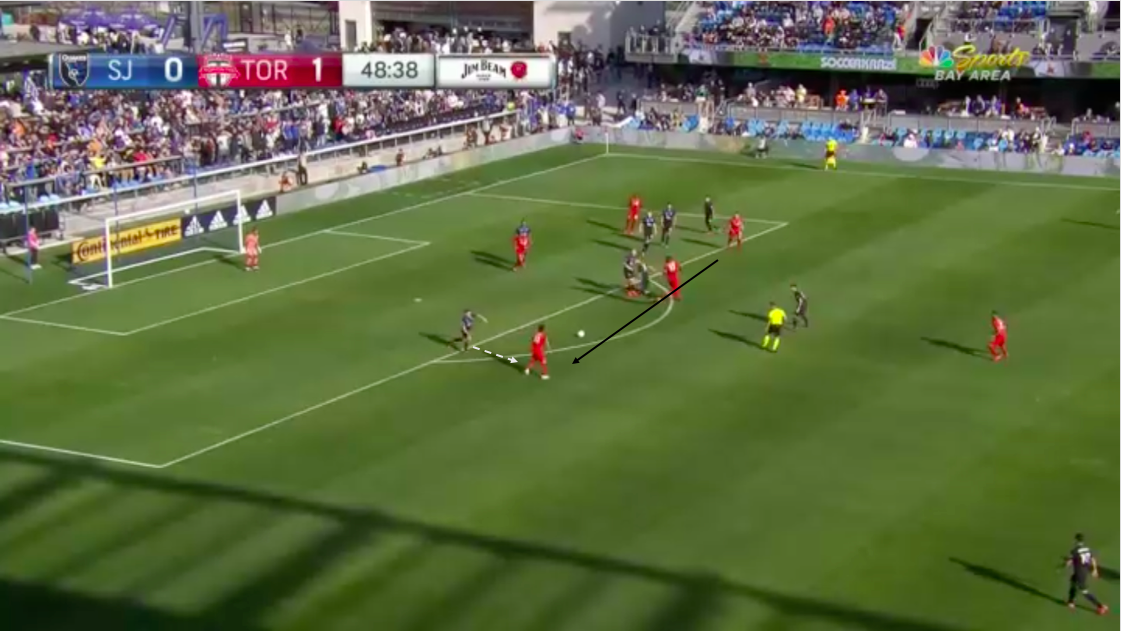 Although the pass across the penalty area escapes Kashia and Eriksson, we see that Thompson is already reacting to put the receiver under pressure. As the Toronto player moves to the left, Thompson engages and uses his physicality to show the attacker further away from goal. 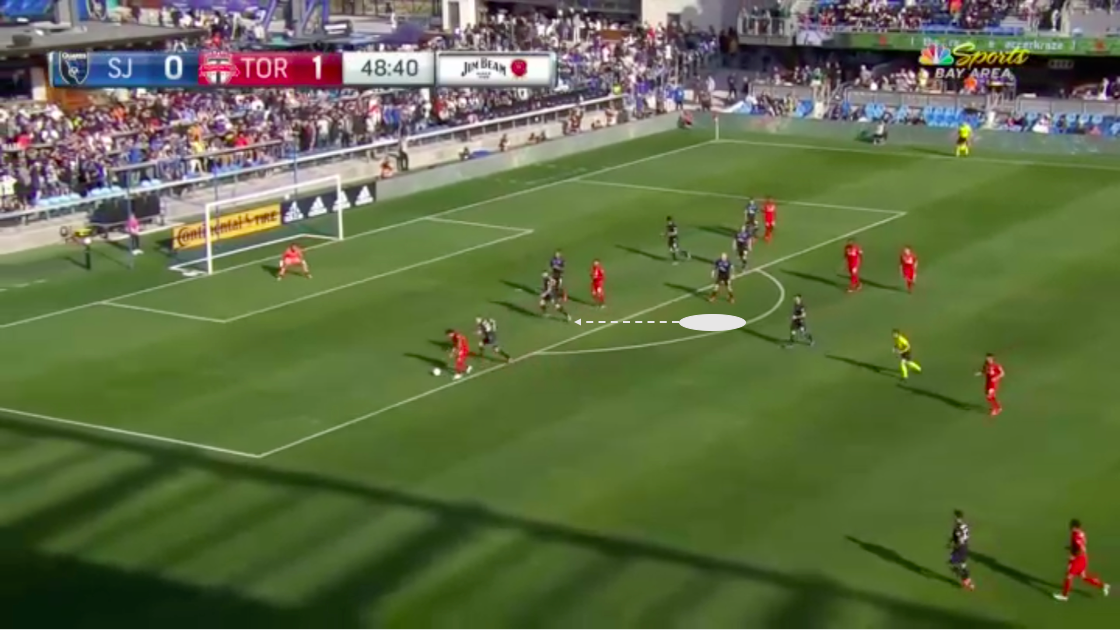 While this is happening we notice that centre-back Kashia is immediately recovering to cover the centre. Even though Toronto is able to get a shot off, San Jose was able to make it difficult for them to do so. We also notice that they are defending with eight players. If they were able to recover the ball, a direct pass would be played to one of the two counter-attacking players.

The following section of the analysis will look at how Almeyda has gotten San Jose to counterattack.

While we have looked at what he has brought to the attacking and defending phase, his philosophy has had an impact on transitions. After his first season with the club, San Jose nearly doubled their counterattacks ending in shots from 2.81 per 90 in 2018 to 4.32 in 2019. 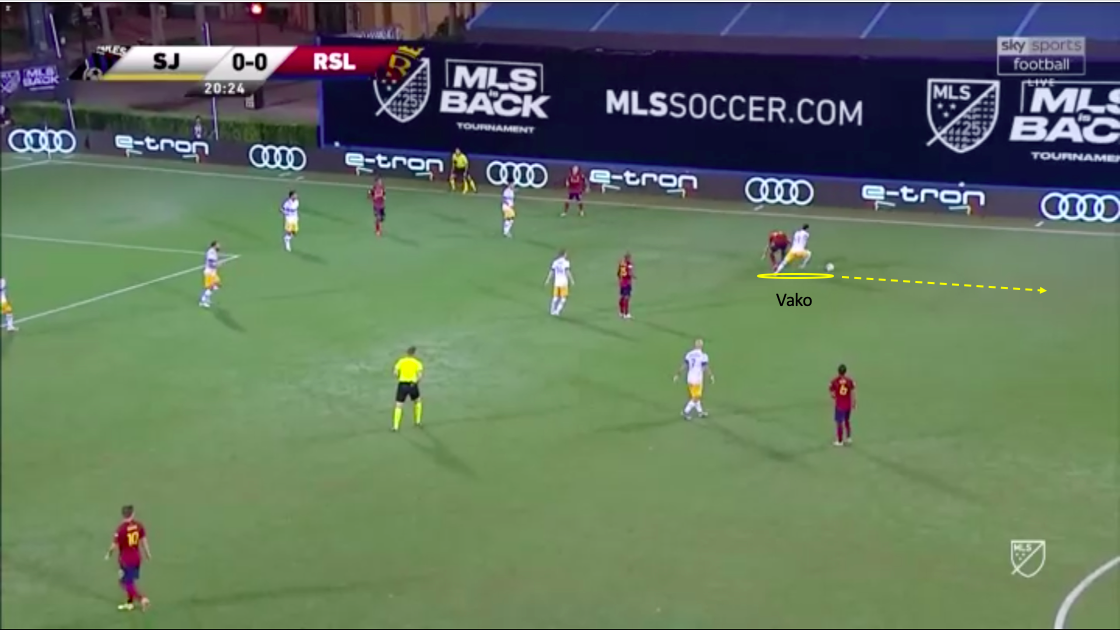 Using an example from their game against Real Salt Lake, we see how the Quakes operate after they win the ball back. Upon regaining possession in the defensive third, Vako begins to dribble with pace, initiating the counterattack with the rest of the front four. After shrugging off a challenge and attracting the defender’s attention, he passes the ball to Rios. 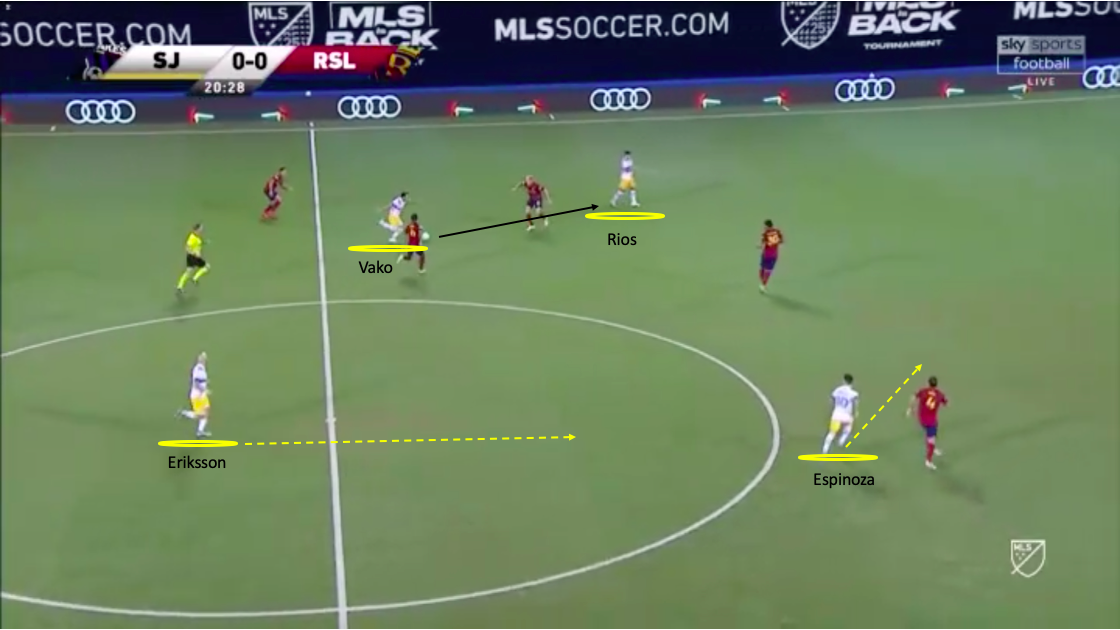 Rios allows the defenders to track Vako’s run and this tactic opens up an opportunity to pass to a wide-open Eriksson. Notice that Vako and Espinoza are continuing their runs in the gaps between the three RSL defenders. This gives the central defender a decision to make. 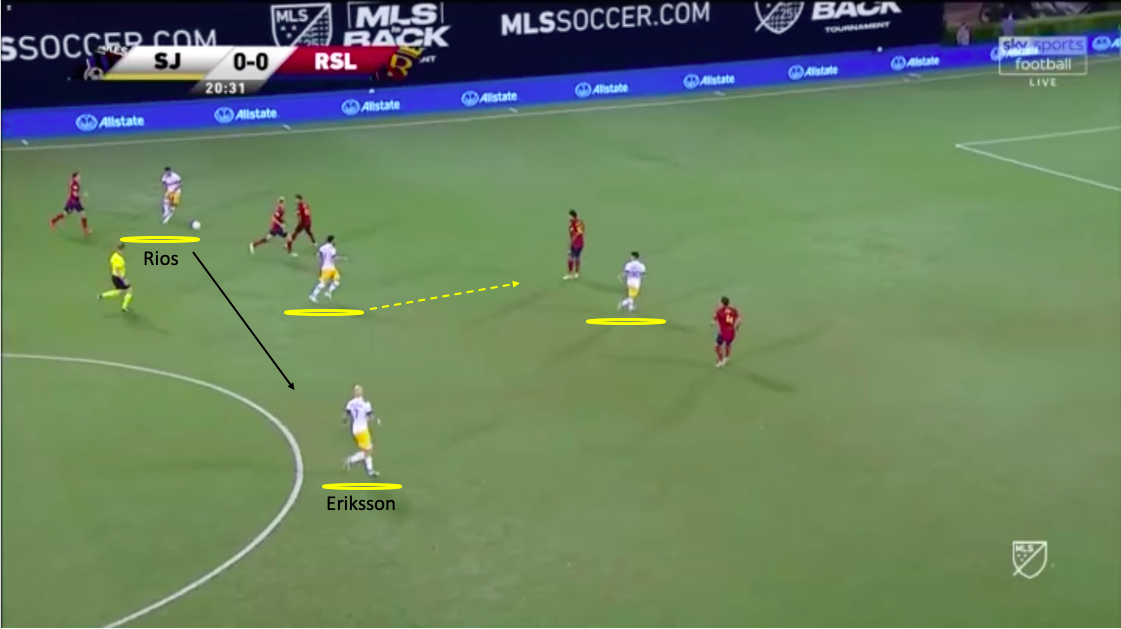 Since the defender split Vako and Espinoza, Eriksson is able to pass the ball to Vako. As the defenders begin to move towards Vako once again, he quickly passes to Espinoza. The Argentinian takes a touch and is able to comfortably power a shot past the goalkeeper. 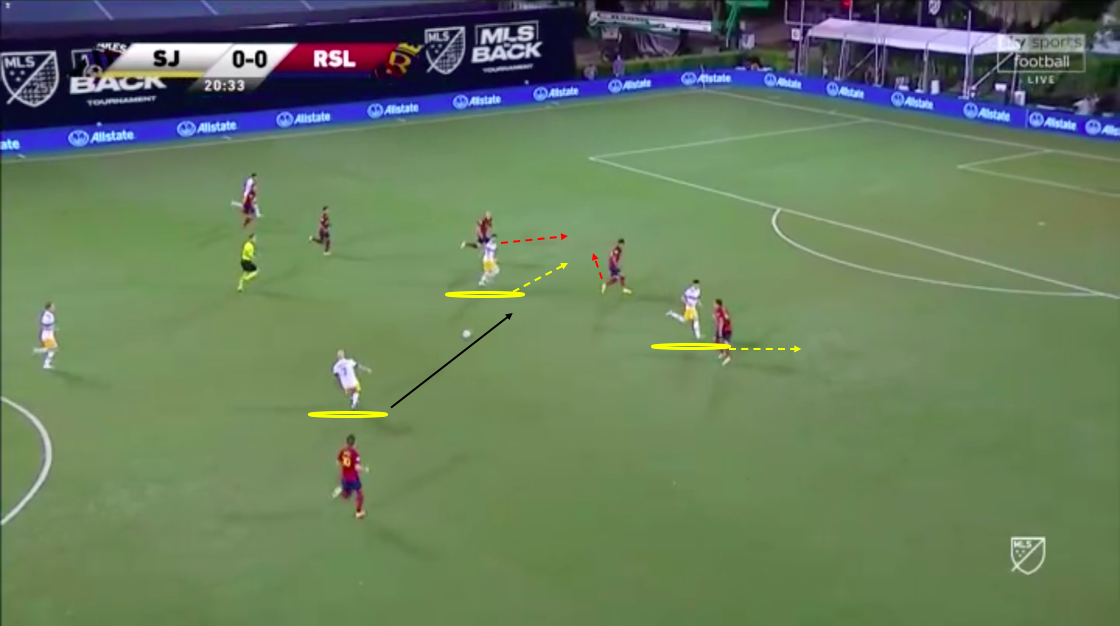 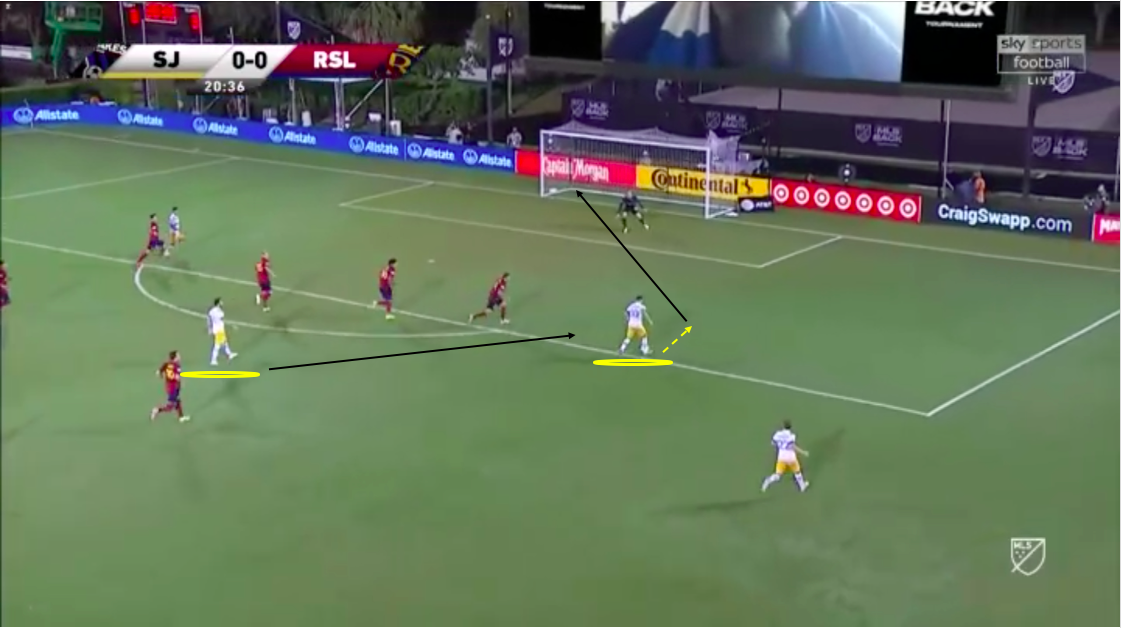 The use of the man-marking tactic caught teams off guard in the Florida heat. In a competition such as the MLS is back tournament, Almeyda’s gamble almost paid off. It is a tactic that could backfire as the league gets back into a rhythm and analysis reveals the gaps in the San Jose armour.