On 11th December 2019, former AC Milan coach Gennaro Gattuso took over SSC Napoli. His predecessor was the ex-Real Madrid boss, Carlo Ancelotti, who had just sealed a place in the Champions League last 16, one day before. What was the reason for his sacking? Five wins, six draws, and four losses at the beginning of the last season of Serie A, 1.4 average points per game and a position in the table far too low for Napoli’s standards.

Furthermore, the storm triggered by the defeat in the Champions League against Salzburg and the decision of the players to refuse the retreat spoilt the relationship between Ancelotti and the president Aurelio De Laurentiis.

Gattuso played for Ancelotti, and in his first real opportunity on a Serie A bench, he missed the Champions League spot by just one point. The media labelled him immediately as a “catenacciaro”. His teams preferred the positional defence in order to counterattack as quick as possible. But Gattuso managed to shape his football idea a step further. And now, he has a team that can be a time bomb both in Italy and in Europe.

In this tactical analysis, we will be taking a look at how Napoli is evolving under the Italian manager. Above all, how far can Napoli go this year after changing their tactics: the outset of the 4-2-3-1 formation with Gattuso conducting the orchestra.

This decision was affected by two important factors: Victor Osimhen and Tiémoué Bayakoko. Cristiano Giuntoli (Napoli SD) gifted Gattuso with two top players. The first is one of the best African forwards at the moment while the second was his key midfielder at Milan, the loyalist. Their contribution will be crucial this season. In this vision, this formation gave Napoli a lot of defensive balance and the possibility to deploy a devastating attacking force at the same time. 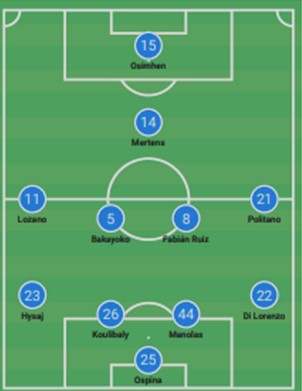 By now David Ospina is the first-string goalkeeper because of his ability in the build-up phase and his leadership. Using the stats of last year we can clarify the analysis better: 86% pass accuracy for the Colombian whereas 83% for the Italian Alex Meret; 3.1 long balls per game vs 2.2; 22 goals conceded in 23 games vs 37 goals conceded in 29 games.

Giovanni Di Lorenzo, Kostas Manolas, Kalidou Koulibaly and Elseid Hysaj make up the back four. This is an extremely solid backline defensively and they are also very comfortable in possession. Surely, Koulibaly is the chosen man in the build-up phase, one of the play sources of Napoli.

As we can see in the image below, the Senegalese prefers to widen the game: the 23.2% of his accurate passes are deployed to the left, to Hysaj or Ghoulam. Alternatively, the former Genk man chooses one midfielder or Manolas in order to move the opponents and their pressure. As a matter of fact, he completed 95 passes (89.6%) in this phase. The second one is Manolas with only 44 passes. This big difference represents the importance of the Senegalese, who seems reborn after his last underperforming season. 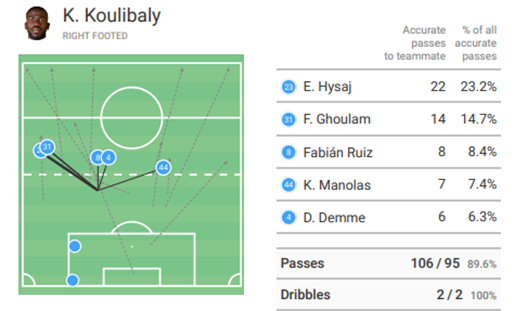 The centre of gravity is composed by the double pivot. Gattuso needs two midfielders with complementary features and he can build his duo with lots of players: Diego Demme, Piotr Zielinski, and Stanislav Lobotka are important reserves.

The Frenchman only played against Atalanta. But he is a dynamic and disciplined player. This is attributed to his strong positional sense, off the ball movements and ability to read the game. He completes the midfield by doing the “dirty work”: 3/3 defensive duels, 5/7 offensive duels, 2/2 aerials duels, and six recoveries.

Although he is predominantly known for his tactical awareness, and the defensive aspect of his game, he is also capable of playmaking from inside his own half and he is an efficient passer in the build-up phase: 29/32 short and medium passes (91% of pass accuracy).

Gattuso has got speedy players. As a matter of fact, he decided to reflect upon his team’s pressing attitude. Napoli deploys a simple man orientation, trying to move the opponents to the sides. This situation can be useful if the team keeps the defensive line higher and if the PPDA is low. In the game against Atalanta, for example, Napoli astonished the rivals by applying high pressure in the final third, as we can see in the image below. The PPDA was 12.5 in the first half and 10.7 in the first 15 minutes. 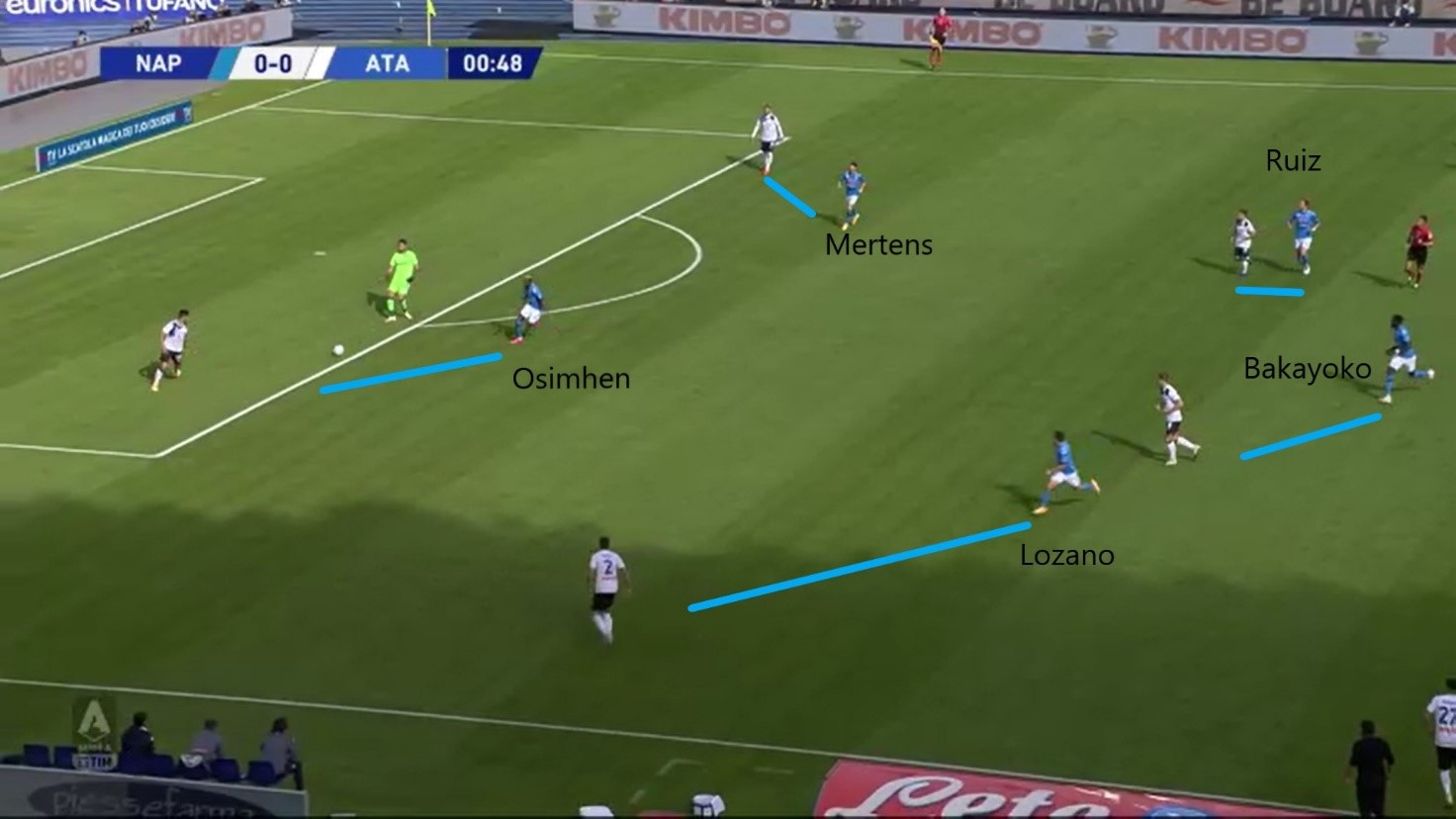 But this key approach was incisive for the average positions of the players. In the following image, we can note how the team maintained a high position on the pitch. In this way, Atalanta could not exploit Gomez and Iličić, two important players between the lines.

Another important detail is the position of the four forwards: Lozano and Politano are not completely wide but tried playing near Mertens and Osimhen in order to combine shortly against Atalanta’s three-man defence. 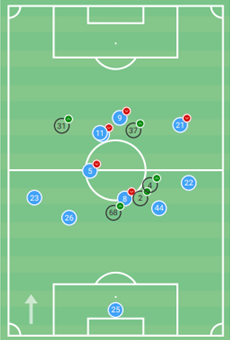 If the first line of pressure fails, Napoli is ready to close their central channels through a solid 4-4-2 formation, with no space between the lines. They can move on the flanks as a compact unit. It is not a coincidence that Napoli conceded only one goal in three matches. 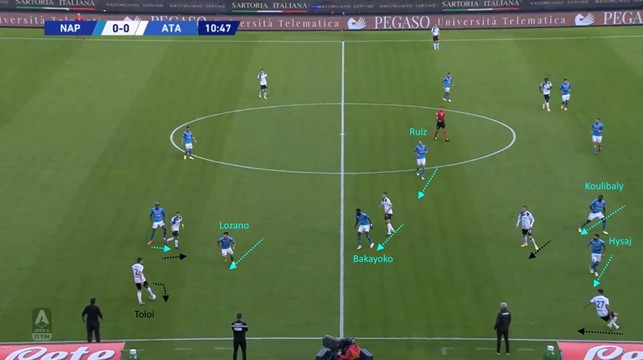 In the image below the focus is on their own third: Manolas contributes with five interceptions, one sliding tackle and the 14.9% of duels of the entire team. Di Lorenzo has the highest stat in interceptions (seven) and Koulibaly in sliding tackles (two). 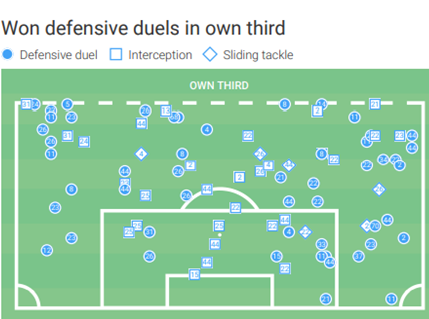 Is Napoli the best-attacking force in Serie A?

445 goals in the last five Serie A championships. That’s Gonzalo Higuain’s record and the certainty of amusing everyone, especially with Maurizio Sarri. Napoli, under Gattuso, rediscovered the desire of scoring after the disastrous Serie A 2019/20 campaign. Only 61 goals last year but already 12 in three matches this season (the one with Juventus is a defeat by forfeit).

Napoli has got important attacking players with excellent shooting and dribbling features. In the image below we can see their shooting radar: Napoli manage to finish their actions with a certain regularity in the penalty area. The central channels across both halves of games are the most prolific: 19 shots between 16-30’ and 22 shots between 61-75’. 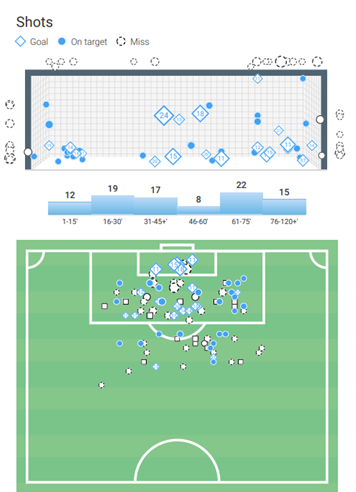 Napoli is also one of the unluckiest teams in Europe, with more than 50 instances in the last two seasons where the ball ended up hitting the woodwork, a new record. Insigne hit six posts last year, Mertens and Milik five, and Politano three. This year there are already three on their account too.

The new Napoli setting allows the forwards to attack systematically as Lozano and Osimhen constitute 37% of the successful dribbles in the final third with 0.13 and 0.19 xG respectively. Politano completed nine dribbles with two goals and Zielinski five and Mertens four.

Napoli also exploits the width and the crossing abilities of players like Lozano, Insigne, Ghoulam and Malcuit. The Mexican contributed with 5/16 crosses (31% of accuracy); the Belgian has an important xA (0.99) and completed 6/12 crosses (50%); the Algerian 3/7 (43%) while the French is yet to register a successful cross (0/5). 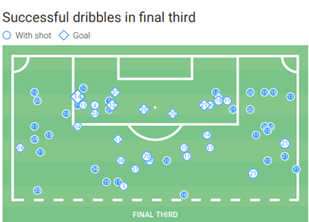 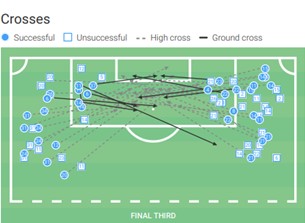 The capacity of the players to switch their positions during the game is fundamental in order to create dangerous opportunities. In the first goal against Genoa, Insigne cut in the penalty area with Mertens overlapping on the left.

One of Sarri’s trademarks was the connection between Insigne and Callejón. The Spanish ace always cuts behind the full-back and he rarely goes offside. In this case, the two protagonists are Mertens and Lozano, who is ready to attack the space behind his direct marker, Luca Pellegrini. This is a proof that Gattuso gives his forwards freedom in the final third. 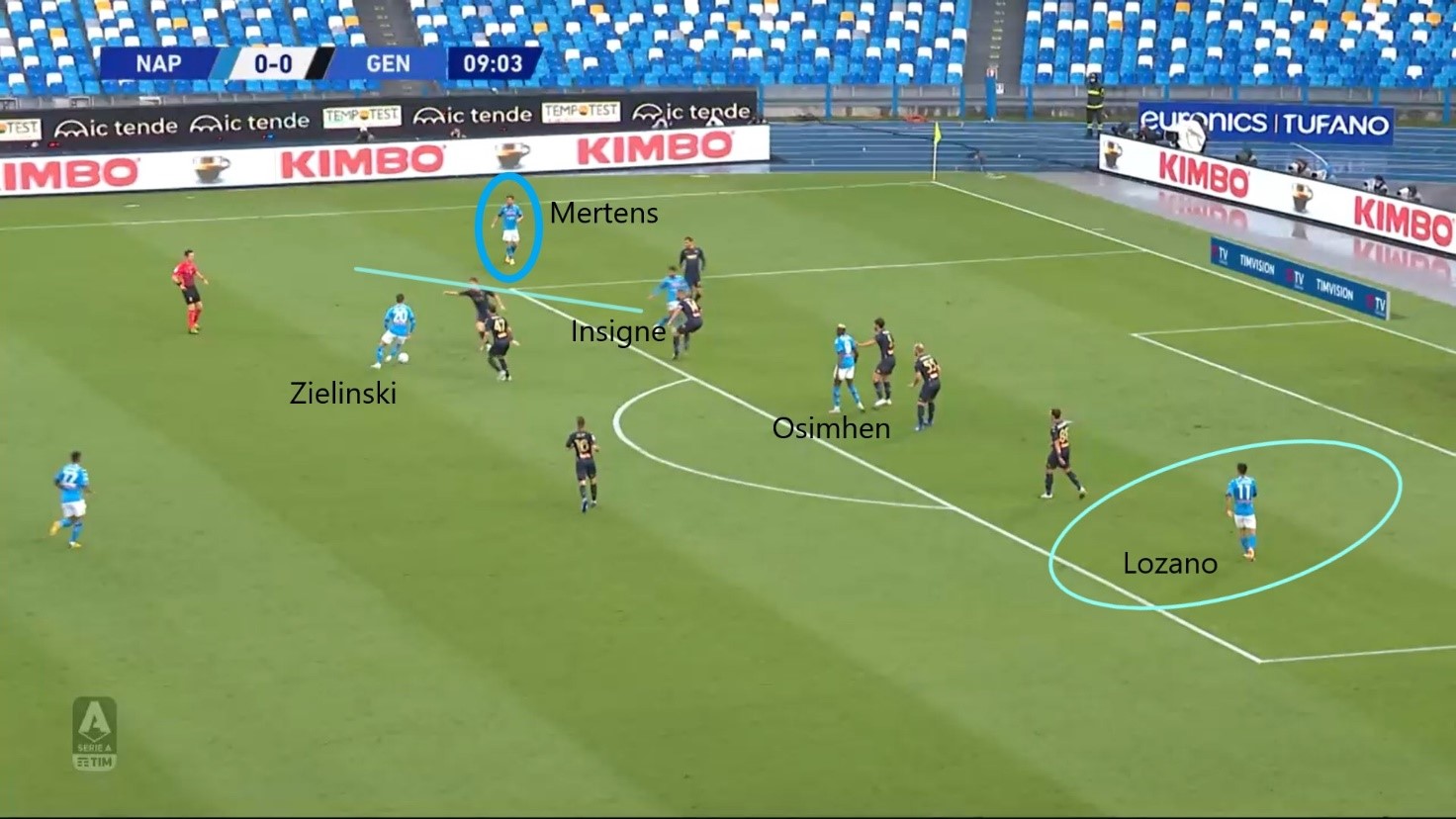 Gattuso fully believes in the ability of his full-backs to attack the space beyond the wings. In the fifth goal against Genoa, Elmas dragged Ghiglione out of his position, which broke Genoa’s back five. Hysaj and Koulibaly sensed the opening, and then exploited it. Koulibaly played a long ball to Hysaj who was charging into the gap and towards the final third. Hysaj controlled the ball beautifully before putting it into the path of the oncoming Elmas who converted the ball for Napoli’s goal. Ghiglione was completely outplayed by Elmas’ movement. The below image from the game supports the analysis. 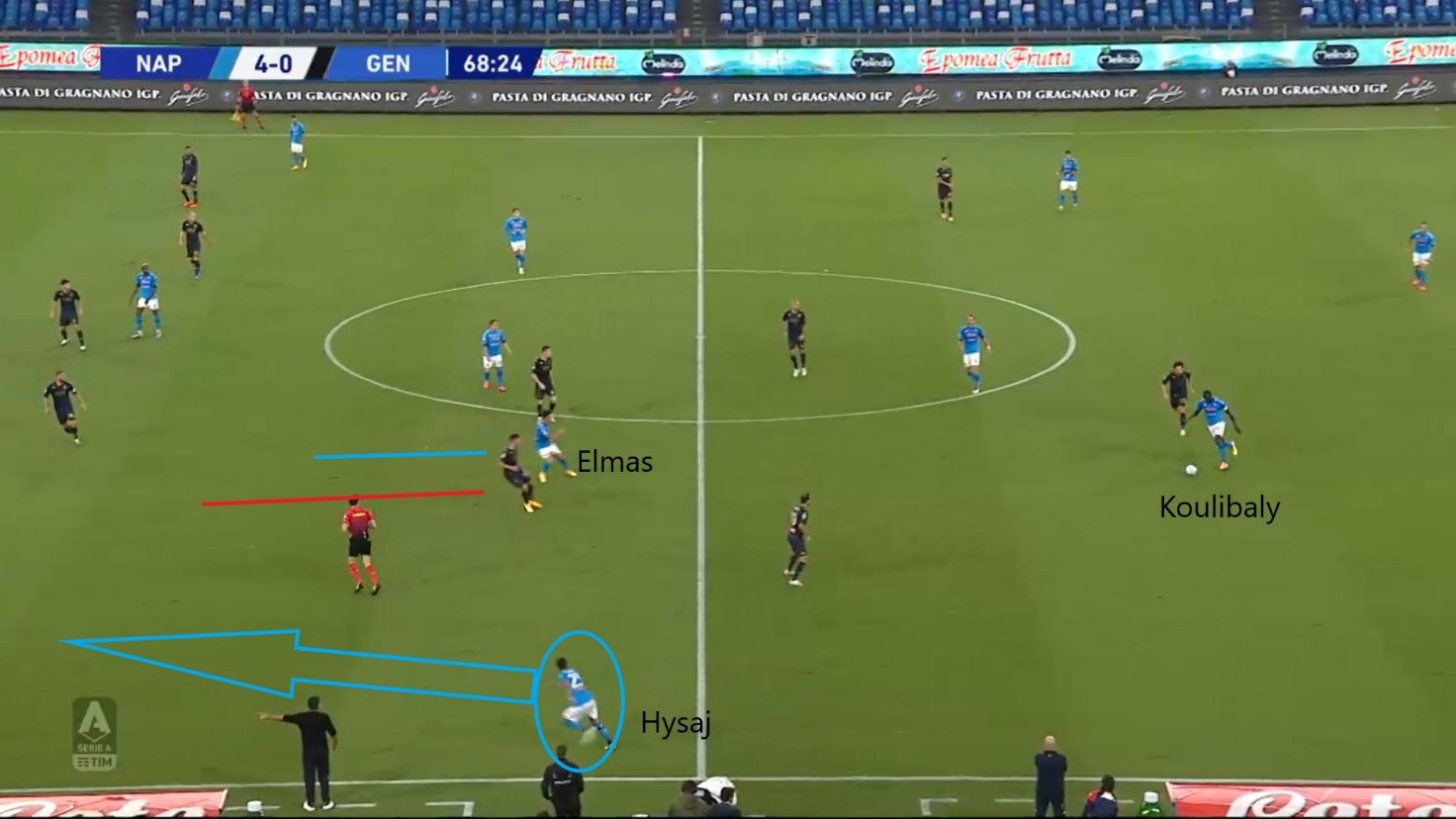 It is still too early to tell whether Napoli will be successful this year, however, the change in tactical approach can be decisive, especially in a crazy season like this one. Gattuso seems to be focusing on the league and winning the Coppa Italia.

But the former Palermo manager has one other important goal on his mind: bringing them to the Champions League. It will not be simple because the competitors are strong. Atalanta, Lazio, Roma and Milan have different motivations. But Napoli has new important players who are all up to speed with the system and a true lion on the bench. 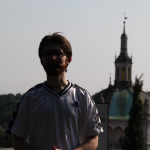