Eugénie Le Sommer has been one of the best French players over the last decade. She is an experienced player who has been playing since 1994 before joining Stade Briochin, now known as En Avant de Guingamp, and scoring 33 goals in 65 matches with her team from 2007 to 2010.

Following this, she went on to play for Lyon and this change of team and environment suited her even further, with the result that she became one of France’s best goalscorers, notching 86 goals in 174 games for her country. She also scored 272 goals in 328 games for Lyon, winning numerous trophies, including a staggering seven UEFA Women’s Champions League titles, the 2019 Women’s International Champions Cup, nine Feminine Division 1 titles, eight Coupe de France Féminine titles and one Trophée des Championnes Féminin title. Thus, her quality and pedigree are not in question, despite a minor goalscoring slump this season.

In this tactical analysis piece, we will explore the characteristics, strengths and traits of this remarkable player that have led to her being so successful for club and country for over a decade.

Le Sommer will turn 32 this summer, but her performance levels have not dropped over the years, and her years of experience have made her even more potent in the box. She is also a creative presence for her team, pitching in with assists along with her goalscoring feats, and this has been fundamental for Lyon’s tactics.

When playing against teams that defend well, she often drops into midfield to receive the ball outside the box and either create chances for her teammates or advance and shoot. In either situation, Le Sommer has proved to be very efficient and she has scored many goals from outside the box in her career, along with the long list of assists that she has delivered from those positions as well.

Being able to play in different attacking positions is another valuable trait which she has shown – she is primarily a striker, but has played as a number 10 and off the left flank on multiple occasions in her career as well. 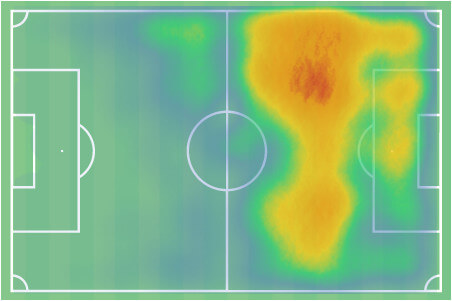 Her heatmap shows how she moves a lot in the final third to help her midfield teammates in finding passing options and confusing the opposing defenders, and after she receives the ball in those areas, she either passes and runs towards the box to receive the ball again or advances by dribbling past defenders. In addition to this, Le Sommer contributes in the build-up phase as well, asking for the ball near either wing before crossing it to the other wing to create numerical superiority. This assistance in playmaking helps Lyon and France a lot in the attacking phase, especially when Le Sommer does this well.

It is true that Le Sommer hasn’t been consistent in terms of goal-scoring for Lyon during this season, but at the same time she is a very technical player with experience in scoring goals. She averaged over 30 goals per season between 2014 and 2019, showing her brilliance in front of goal, but over the last couple of campaigns, her playmaking skills have come to the fore and this may be a reason for the dip in goalscoring numbers, as she takes up more of a creative burden for Lyon. She has scored just nine goals thus far this season for Lyon, but as we will show in this analysis, her innate ability to score goals has not gone away.

She is extremely proficient at shooting with either foot, which makes her an even bigger threat in the penalty area. In fact, her last goal at the time of writing came from a left-footed shot from inside the box, as can be seen in the next image. 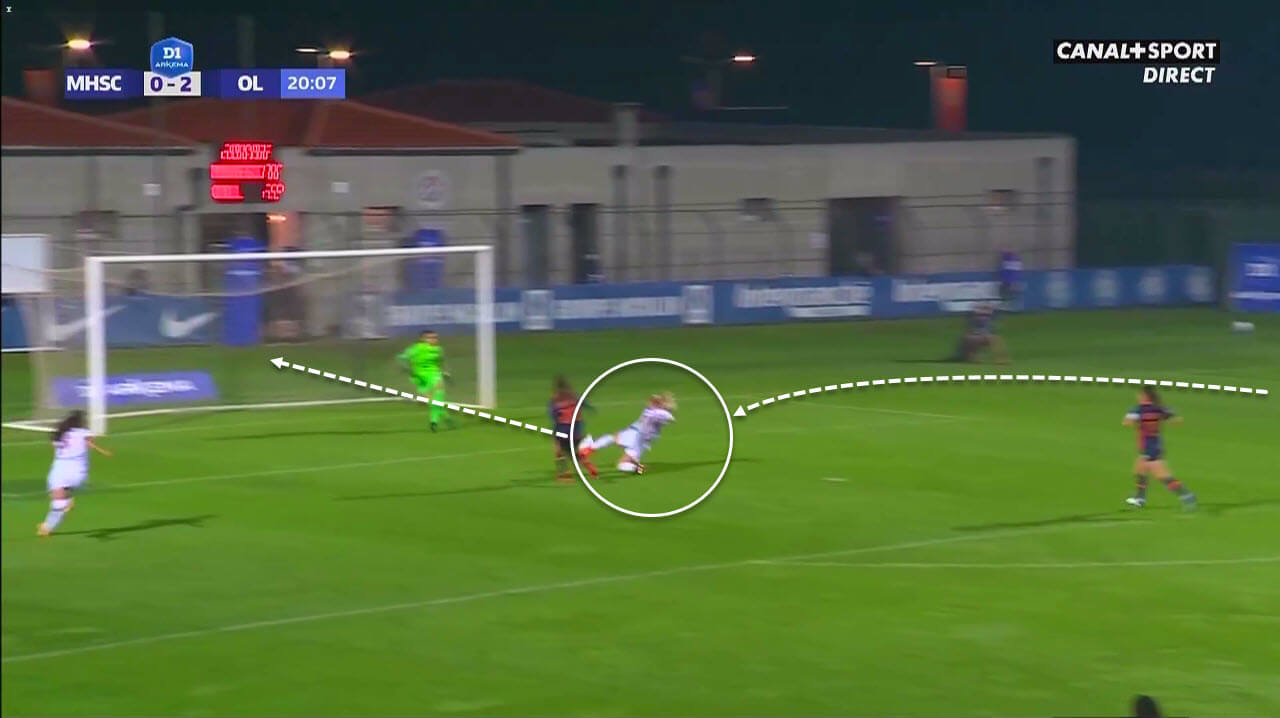 We can see how she positions herself to get onto the end of the cross and execute a shot while sliding onto her teammate’s pass – this requires good movement and anticipation which Le Sommer has in spades.

Le Sommer is also an instinctive player, in that she does not take too much time to decide her next move, which often allows her to gain an extra second or two ahead of the opposing defenders and goalkeepers, which is all she needs to put chances away. This habit of making optimal decisions quickly is one of the reasons why she is still considered one of the best strikers in Europe.

As an example, this goal against Fortuna Hjørring just shows how unpredictable and dangerous Le Sommer can be when she drops into midfield. She scores from a long-range shot with her first touch after receiving the ball, which catches the opposition goalkeeper out. 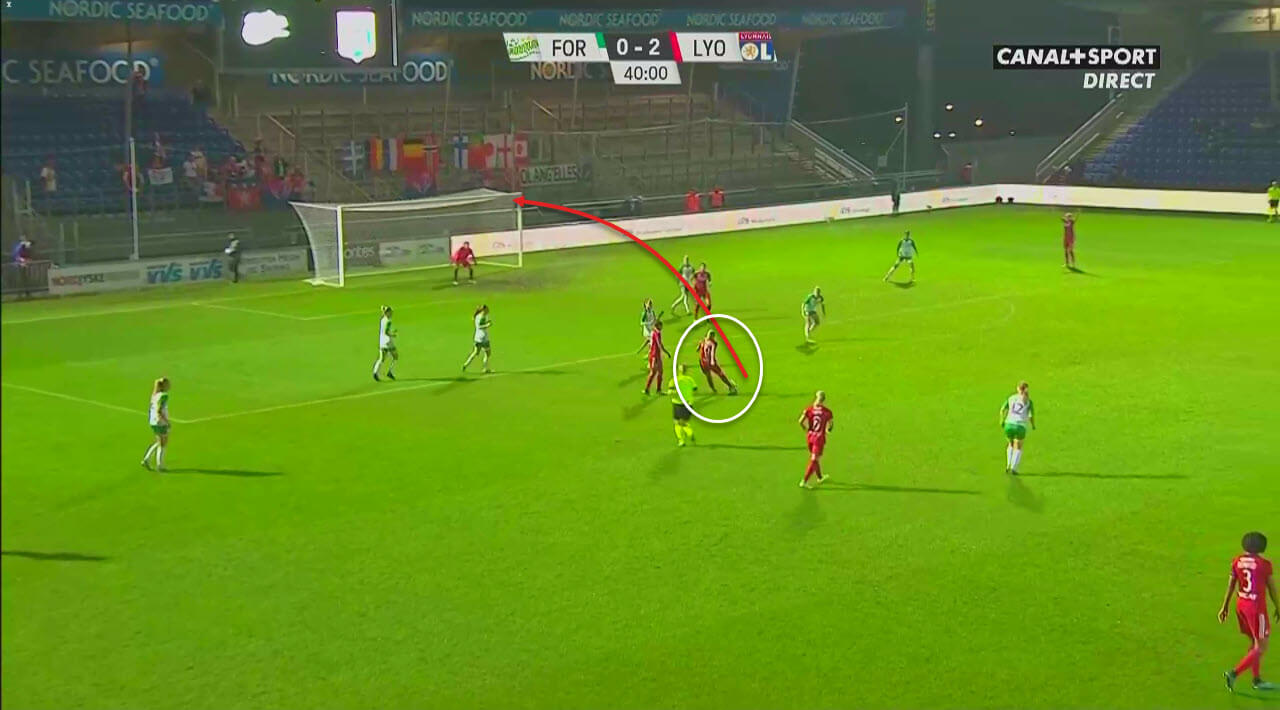 Le Sommer’s excellent technique can be seen in the way she executes volleys. She is perhaps one of the best in the women’s game at this particular skill, and is often able to take advantage of crosses in this manner. This also serves to surprise and catch out opponents who may not be expecting a volley, and therefore adds to her explosiveness and unpredictability in front of goal, being able to shoot powerfully with either foot. 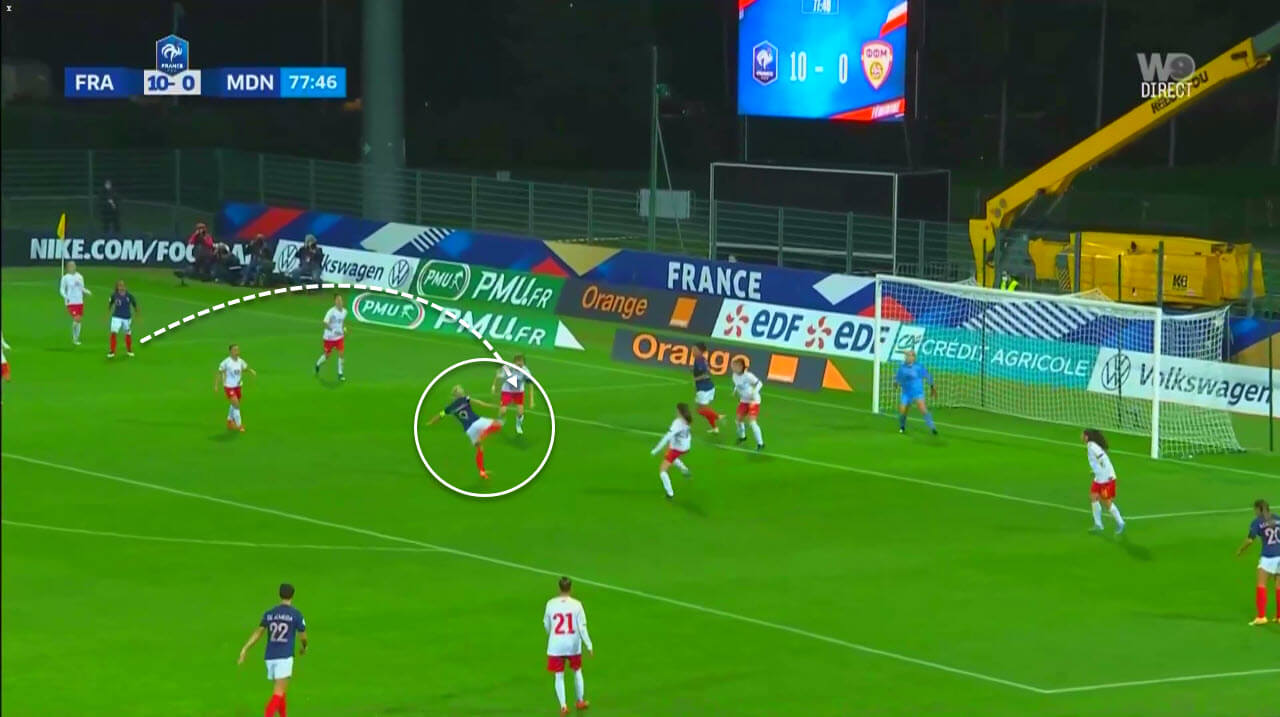 This example shows how she is acrobatically able to get on the end of a cross from the left and power a shot into the net, leaving the goalkeeper with no chance of saving it.

The 31-year-old is also very good at shooting from distance, with powerful and accurate shots that are difficult to save. This is helpful against sides that sit back and give up space in front of the box for her to exploit, and she has scored multiple goals from those sort of areas throughout her career.

We can see in the next example how Le Sommer scored a goal with a powerful shot without even controlling the ball after receiving a backward pass from her teammate. Again, we see that she had already decided to take the shot before the pass arrived, and therefore was positioning herself to take it on first time, which is another example of her ability to make the correct decisions instantly in the heat of the moment. 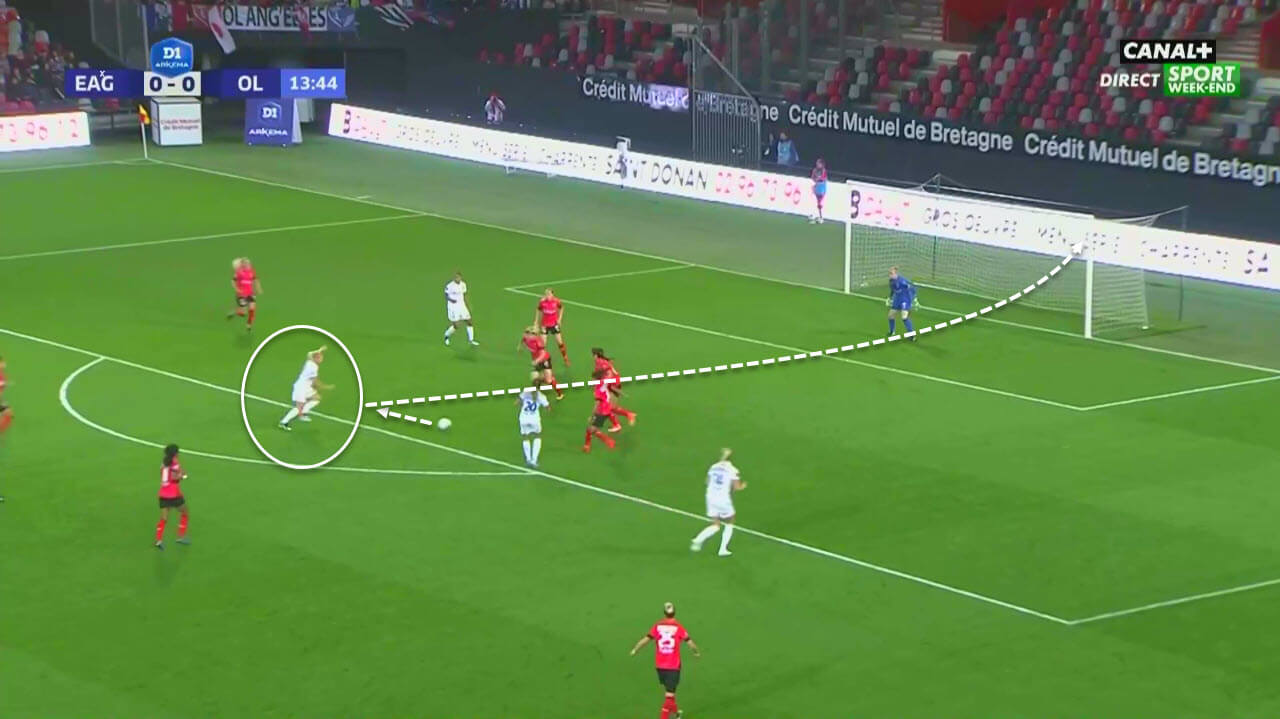 Another example of her long-range shooting ability can be seen in the next image, where she scores from quite some distance. Here too, she made her decision to shoot early, 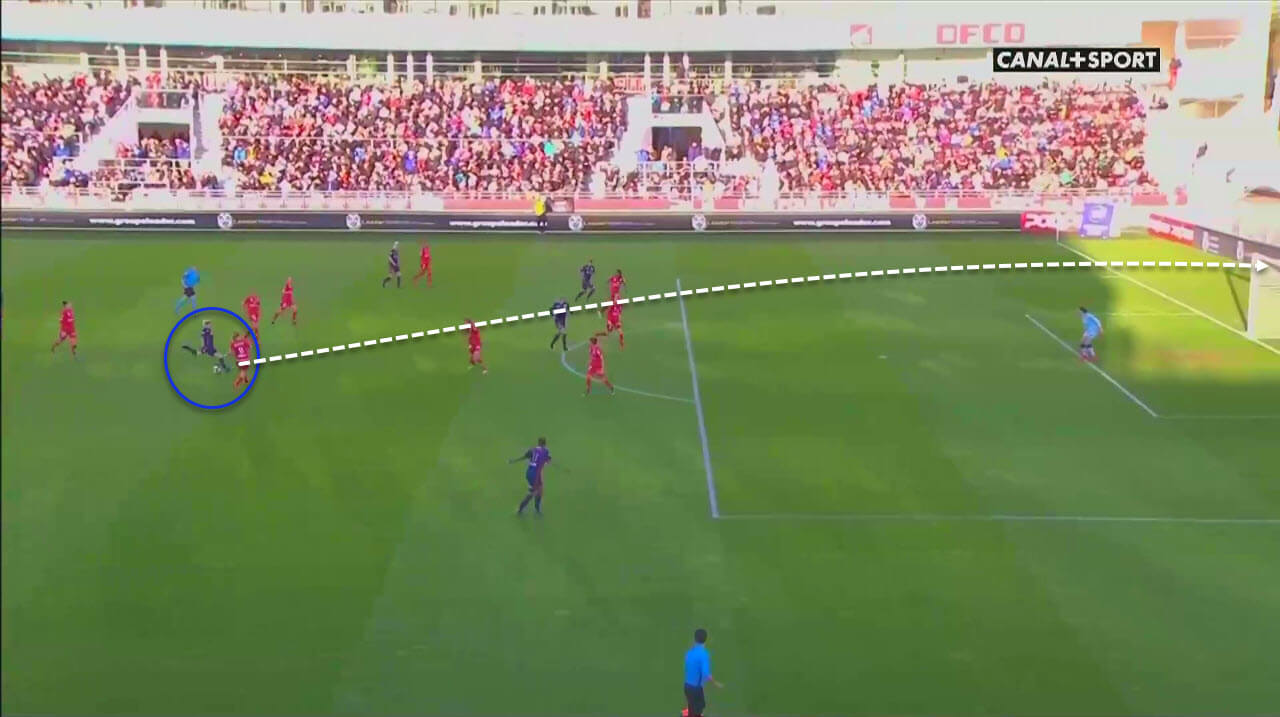 Le Sommer has made five assists this season and although she is not known for her playmaking abilities, she has an important role in creating chances for her teammates this season. This may help remove some of the questions around her goalscoring exploits, or rather the lack of them, if she keeps it up.

The 31-year-old is also fairly versatile, as mentioned earlier, and having played out wide on the left and as a number 10 occasionally for France and Lyon, she can be relied upon in those roles to play more of a supporting role for the striker. Her technical ability means that she has been quite successful when playing out of position as well, and this has also helped her become a creative hub for Lyon this season.

For instance, in this action against PSG, Le Sommer received a through pass behind the defenders and found herself almost in a 1v1 situation with the goalkeeper. However, instead of shooting, she preferred to pass to her teammate who was running into the box, unmarked, from the other side. 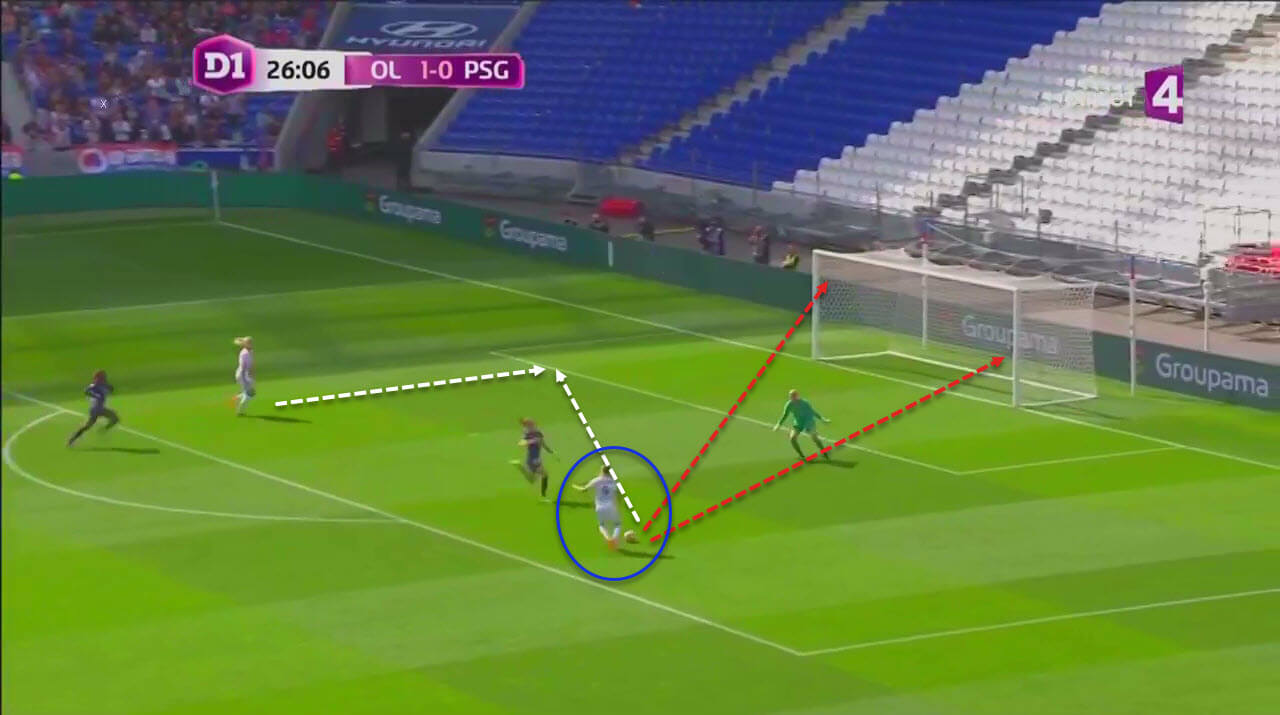 In addition to such assists, Le Sommer is also capable of creating a lot of danger when she plays on the left wing. She is quick, knows how to dribble past defenders, and most importantly, she spots unmarked players inside the box to find them with crosses. We can see an example of this in the next image, where she created the goal through a dribble and left-footed cross. 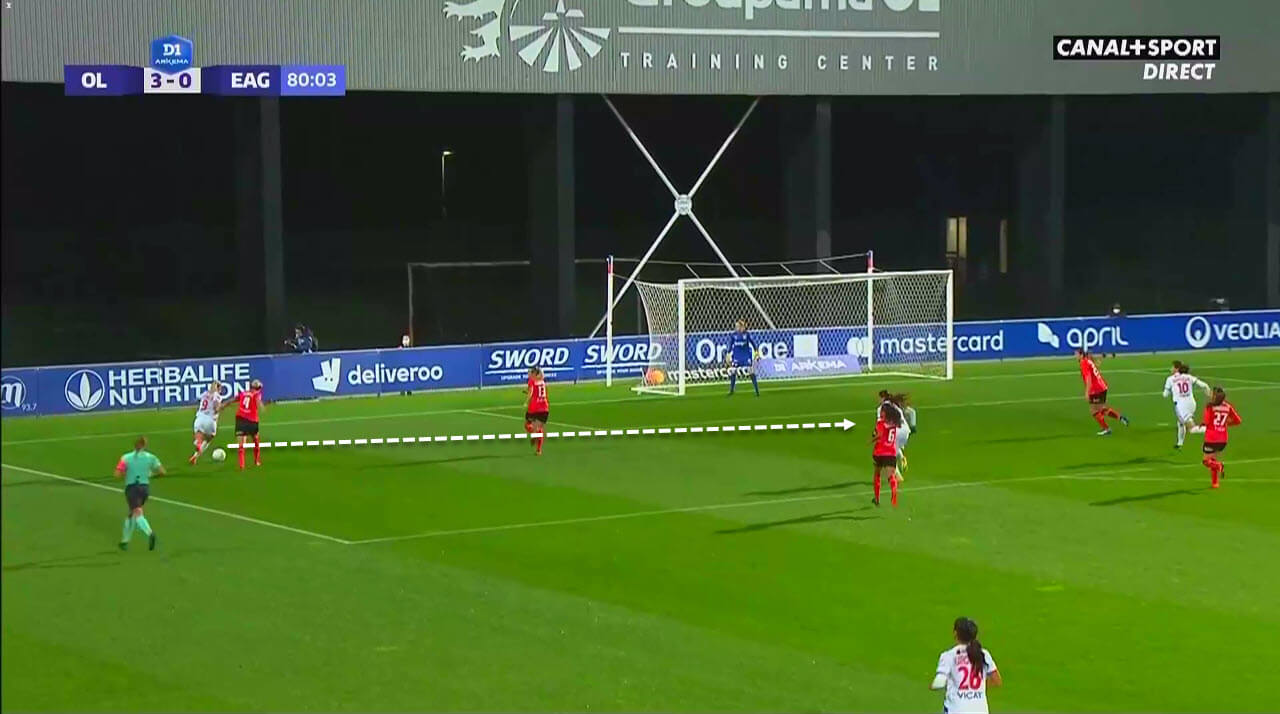 Le Sommer is a big-game player, with vital contributions in  UEFA Women’s Champions League fixtures against teams like Bayern Munich, Wolfsburg, Chelsea, Barcelona and others. She left a tangible mark in each of these encounters by either scoring or assisting, and this is yet another reason why she is considered such an important player for club and country. 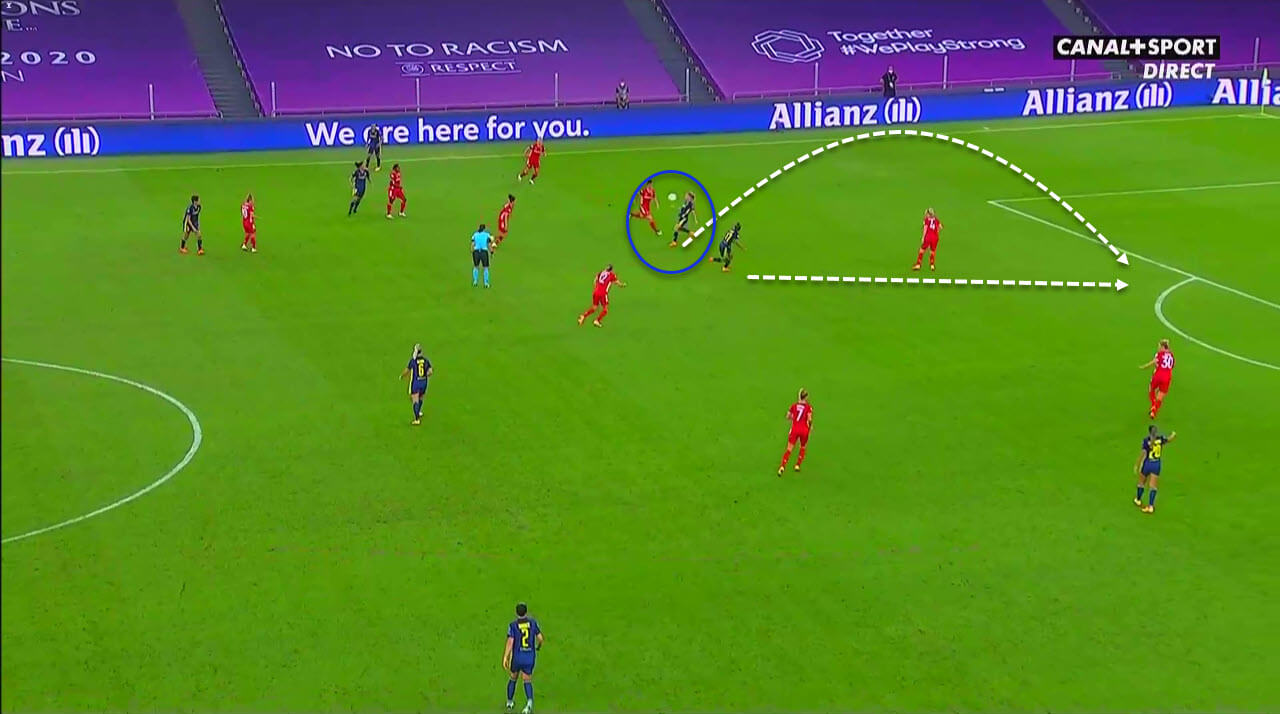 Here, we can see how she was the source of a crucial goal against Bayern Munich by receiving the ball in the final third, controlling it and pulling off a lobbed pass in the direction of her teammate who was making a run into the box. This caught the Bayern defenders out, as they were not expecting such a pass from Le Sommer, believing that she would run towards the box herself. Again, this is another example of her creativity, decision-making and decisiveness in the final third.

Le Sommer is also useful at pressing and intercepting the ball from defenders, and therefore plays a big part in Lyon’s attempts to regain possession high up the pitch. 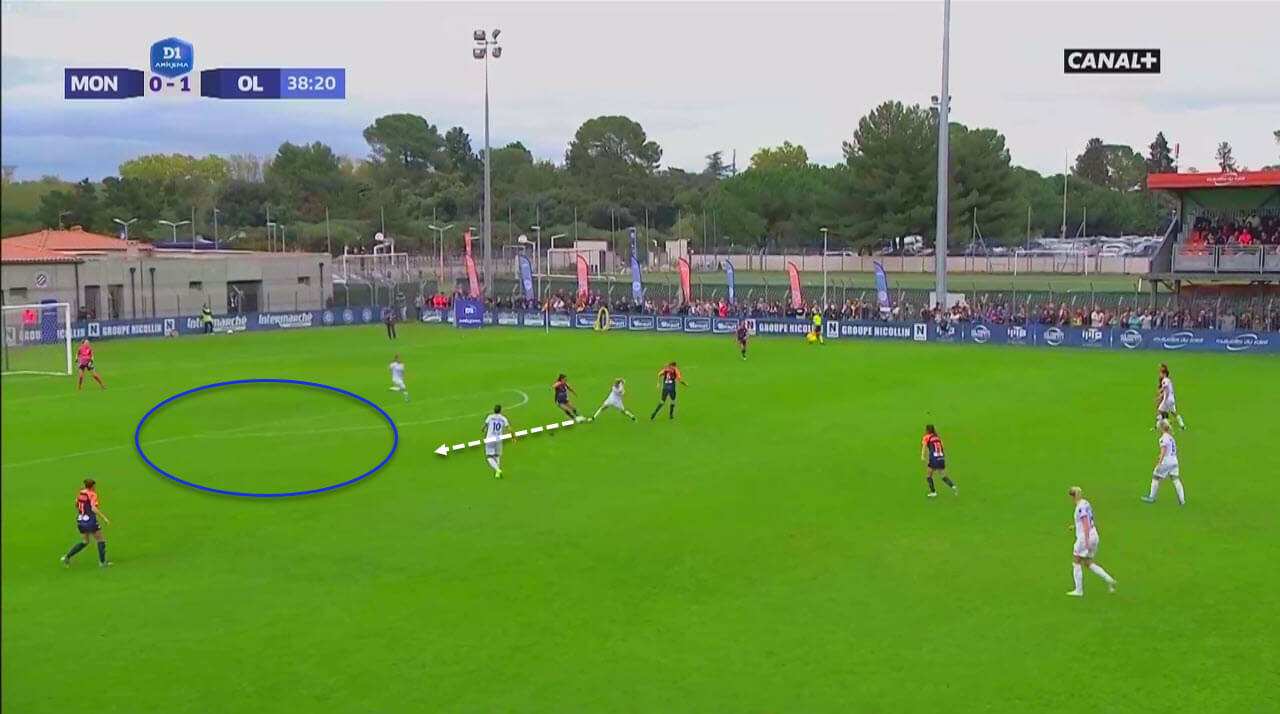 Here, we see how the Frenchwoman was able to intercept the ball and lay it off to her teammate in the same motion, who was able to run into the box and score as a result.

Le Sommer has been one of the best European strikers in the last decade, and even though there has been a lack of goal-scoring contributions from her during this season, she is making up for this by contributing heavily in playmaking and providing assists to her teammates. Her innate ability to score goals has not gone anywhere either, so Lyon and France fans should not be too concerned by her relatively low goalscoring numbers so far, as she can easily bounce back to become one of the top marksmen in Europe again.