Following his stint over in the Bundesliga, Paco Alcacer has officially returned back to Spain, only this time, he’ll be donning the yellow kit of Villarreal. Of course, Alcácer is no stranger to La Liga, having previously played for both Barcelona and Valencia, but his career never took off at the former despite success at the latter.

Still, third time is the charm and the stage is set for the prolific centre-forward to hit the ground running – which he already did in a way on his debut – and help Villarreal find the consistency they seek.

This tactical analysis will be a scout report on Paco Alcacer as we’ll present his player profile with an in-depth overview alongside using analysis to see whether he fits Villarreal’s general tactics.

Generally speaking, Paco can best be described as a more of a traditional no.9, a striker who’s ready to pounce on the ball inside the box and bring quality finishing to the table at the same time. His excellent movement and predatory instincts enable him to consistently overperform his expected goal values but also mean that he’s often at the right place at the right time to slot one home.

Apart from that, he is extremely well suited for fast, direct and especially transitional systems that favour a heads-on approach. Even though he is quite capable on the ball and can link up with his teammates quite well – as we’ll see further down this tactical analysis scout report – he is still best utilised inside the area and not in deeper positions.

Due to his excellent positioning, Paco can also be a constant threat in set-pieces and can use his pace to always threaten in counter-attacks. Defensively, he is quite aggressive and Villarreal can benefit from his tendency to press high and try and disrupt the opposition’s build-up.

This tactical analysis scout report will now use analysis to dissect some of his key traits and see how he could fit into Villarreal’s tactics.

Lethality inside the box

Even though Paco is not necessarily an out an out poacher, he could be described as something of a fox in the box. As we’ve mentioned earlier, he is most dangerous when moving inside the opposition’s danger zone as he can find the right openings to strike and make the most out of practically any situation.

We can actually see this from his tally of 13 goals from 9.2 xG in 2019/20 and 22 goals from 11.63 xG in 2018/19. In both cases, the Spanish international overperformed his expected goals values which does indicate he scores from situations that can often not seem promising.

But upon further inspection of all of his shots in both seasons, courtesy of Understat, we can actually see that most of his goals have a high xG value, meaning that the shots leading to those goals were actually taken from excellent positions and mostly inside the box.

The bigger the circle in the image above, the better the chance to actually score. Green circles represent goals, blue were saved shots, red missed, yellow hit the frame of the goal and purple were blocked.

Now we actually start to understand that Paco has this knack of truly being at the right place at the right time, often scoring goals from highly promising situations that could either be a) created by his teammates or b) made possible due to his movement and positioning.

Of course, the truth is probably somewhere between the two options but this on its own already signals that he has the predatory instincts we talked about earlier in this tactical analysis scout report.

But let’s dissect his movement inside the area a bit more. When we crunch the numbers, we can see that he takes 3.3 shots on average in 2019/20 with an accuracy of 44%, meaning that almost every other shot he takes ends up on target.

When you combine that with excellent positional awareness, you get high xG values and in turn, lots of goals. Notice, for example, the image below from one of the games he played for Borussia Dortmund. Initially, Paco is heavily marked inside the penalty area but as soon as he sees an opening, he peels away from the opposition’s players and positions himself just on the edge of the area.

Now, he is suddenly free of the markers and takes the shot first-time to slot it into the top-right corner. Interestingly enough, even with the improved positioning, this goal only carried the value of 0.12 xG, showing that he still needed to be lethal to make the shot count.

But his movement can be used for more than just creating chances for himself. Paco is predominantly used as a focal point that can pin down defenders or even drag them away from their shape when necessary.

Inside the box, this can make the difference between putting a chance away or not getting in the situation to hit it at all. Notice below how Paco continues his run inside the area despite not getting the ball, dragging two markers with him, which then frees his teammate who takes his place and gets into space for the cross.

This type of positional awareness is crucial when coordinating your movement in tight spaces as it can almost always make the difference in the final product. Paco has exceptional movement inside the area and that’s a highly underrated ability as a whole.

While we can definitely see the best possible version of Paco the closer he gets to the opposition’s box, that doesn’t mean he’s totally ineffective outside of it. Granted, he is not really the type of player to thrive in prolonged phases of possession nor will he necessarily help you unlock a deep block but he’s also no stranger to link-up plays.

When we take a look at his heatmap from 2018/19 – since that gives us a much bigger sample of games – we can notice that he predominantly positions himself inside the box and in zone 14. This does give us a slight indication of his playstyle. 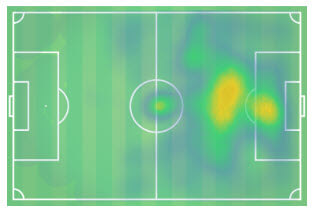 Paco will usually prowl just inside the area and live on the shoulder of the defenders but if he’s unable to impact the game or collect the ball, he will regularly drop deeper for a quick link-up play with his midfielders.

Usually in those instances, he will play a one-two with one of the teammates or just be used for a lay-off ball to a higher platform, which can be invaluable for multiple reasons. First off, it offers a new passing channel for the deeper players and secondly, it usually drags the opposition markers out of their shape, leaving a gap behind.

Notice how that usually works on the pitch in the following image.

Paco receives the ball in the deeper area, dragging the marker and immediately laying the ball off for a teammate that’s surging forward and trying to exploit the newfound space. Even though he won’t directly assist the systematical dismantling of the opposition’s low and compact block, this technique can be used to move the pieces across the board and potentially open gaps around the pitch.

But as we’ve said earlier in this tactical analysis scout report, Paco is not necessarily that well equipped for such tasks and will usually thrive in a more direct and fast-paced environment. In defensive phases, he is often the one staying higher up the pitch and waiting for that chance to counter effectively.

Notice in the image below how he immediately recognises when a chance is presenting itself and even before his teammate gets the ball, he’s in position to burst forward, eventually scoring his debut goal for Villarreal.

This is very much the prototype situation that the Yellow Submarine will likely be using him in when it comes to defensive phases as they are a team that can definitely hurt the opposition on the break and against the run of play.

For that reason, Paco’s good technique and ball control will be key to send Villarreal’s pacy wingers into space in those situations. For example, notice below how he receives the ball as the highest man up front and then lays it off for the incoming teammates. 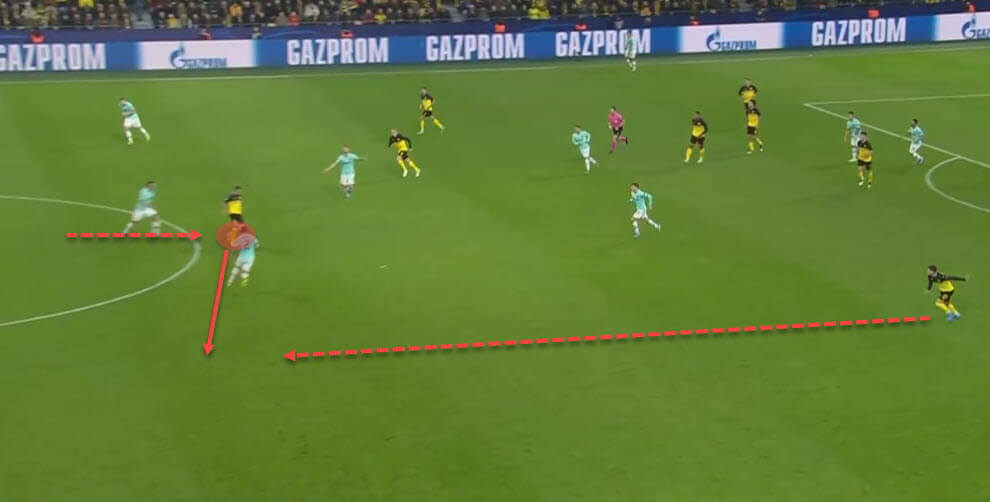 This is something of a trademark move when his teams initiate transitions and is definitely a way he’ll be utilised at Villarreal. That first game was surely the testament to that as Paco bagged a goal in the very same manner, which is not a surprise at all.

Paco Alcácer’s debut for Villarreal was clearly a success – bagging a goal and your team winning all three points bodes well for the immediate future. Still, while we can agree that the sample is way too small for concrete analysis, there are some early impressions that could very well give us a glimpse of the tactics and the system Paco is going to be a part of.

The Spanish international was deployed as Villarreal’s lone striker for the majority of the game but they seemed to have swapped to a system with a striking tandem up front as Gerard Moreno would often join Paco in the forward line.

And this is the biggest thing Javier Calleja is going to have to figure out. Does he play them both at the tip of his attack or does he deploy Alcácer as the focal point with Moreno in support? By looking at the systems they’ve preferred, either option is a possibility.

Villarreal have mostly used their 4-1-4-1 formation in the ongoing campaign, deploying it on 33% of occasions so far but the 4-4-2 is a close second with 32%. Luckily for Calleja, Moreno is quite versatile in his approach and his player profile is quite different from that of Alcácer.

In the game against Osasuna, Moreno was drifting wide and occupying that right half-space far more often than he was actually starting the attacks through the middle. For now, that seems like the exact relationship these two forwards might have in the future.

Paco starts up front and in and around the box while Moreno has the freedom to roam, drift wide and drop deep when necessary. In essence, when moving forward, that just might look something like the image below depicts – Paco rushing the box while Moreno is just behind him and occupies that zone 14.

On paper, this looks like a partnership between two players that could complement each other. Moreno is the better creator of the two so it’s fair that he’s given more freedom in the final third and beyond it.

Those stats tell us how their respective player profiles are suited for essentially different roles – Paco’s lethality – which was explained earlier in this tactical analysis scout report – makes him a direct threat close to the goal while Moreno’s creativity can help support and essentially service his teammate up front.

When we take a look at Paco’s action map and passmap from his debut, we can see that he wasn’t heavily involved in all proceedings and yet, four out of seven actions inside the box were successful.

Villarreal are still a team that’s struggling to assume a clear identity as they shift from wanting to be a possession-based squad and a squad opting for fast, direct tactics with non-stop attacking football.

With Paco, however, they got someone who could suit the latter system perfectly and it will be up to Calleja to utilise him the best way possible. The start of his new adventure was great but is he the man to finally bring them the consistency they yearn for?

Only time will tell.